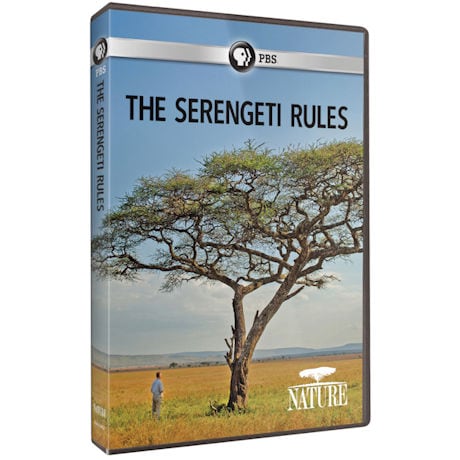 No Reviews Write the First Review
Item #: WB8342AV
NATURE: The Serengeti Rules NATURE presents one of the most important but untold science stories of our time - a tale with profound implications for the fate of life on our planet. Beginning in the 1960s, a small band of young scientists headed out into the wilderness, driven by an insatiable curiosity about how nature works. Immersed in some of END_OF_DOCUMENT_TOKEN_TO_BE_REPLACED
Add to Wish List

NATURE: The Serengeti Rules NATURE presents one of the most important but untold science stories of our time - a tale with profound implications for the fate of life on our planet. Beginning in the 1960s, a small band of young scientists headed out into the wilderness, driven by an insatiable curiosity about how nature works. Immersed in some of the most remote and spectacular places on Earth - from the majestic Serengeti to the Amazon jungle; from the Arctic Ocean to Pacific tide pools - they discovered a single set of rules that govern all life. These pioneers learned that ""keystone"" species can make or break the ecosystems they live in. The role of keystones is both revelatory and surprising: sea otters help kelp forests flourish, supporting everything from salmon to eagles; wolves enable rivers to run clear and help forests thrive; and the humble wildebeest controls the numbers of trees, butterflies, elephants, and even giraffes on the savanna. Now, in the twilight of their eminent careers, these five unsung heroes of modern ecology - Bob Paine, Jim Estes, Mary Power, Tony Sinclair, and John Terborgh-- share the stories of their adventures, reveal how their pioneering work flipped views of nature on its head, and give humanity a chance to reimagine the world as it could and should be.

Otters and Orcas - An Alaskan Mystery
In this short film, Jim Estes investigates why the kelp forest ecosystem in the Aleutian Islands has collapsed. He discovers that all ecosystems fit together and impact one another, from orcas to otters to kelp forests.

Bob Paine Tribute
Bob Paine was one of the greatest ecologists of all time. His discoveries continue to influence ecology and conservation throughout the world. This tribute video highlights his incredible findings, including footage from his last interview.

Jim Estes Portrait
Jim Estes got his start as an ecologist by chance, but through his work with sea otter populations in the Aleutian Islands, Alaska, he formed a case study on the importance of keystone species to an ecosystem.

John Terborgh Portrait
Meet John Terborgh, a tropical ecologist who has spent his life studying and living in the Amazon rainforest.

Mary Power Portrait
Meet Mary Power, a freshwater ecologist who studies river ecosystems all over the world. Her work has revolutionized how we understand these complex habitats.

Tony Sinclair Portrait
Meet Tony Sinclair, an ecologist whose work started in the Serengeti in 1965. His work revealed a set of ecological rules that govern both the Serengeti and most other ecosystems on our planet.