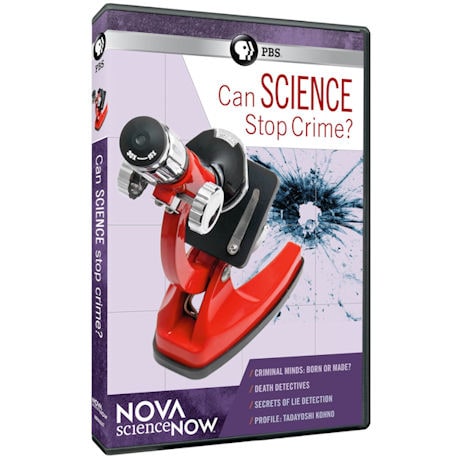 No Reviews Write the First Review
Item #: WB8522AV
Can Science Stop Crime? Can science help catch crooks? We'll peer inside the criminal mind and discover cutting-edge forensic techniques that help investigators stop criminals in their tracks. The Criminal Mind: Born or Made? - How might genes, brain structure, and environment conspire to make one person a criminal and another a rule-abiding citizen? We meet scientists working to uncover END_OF_DOCUMENT_TOKEN_TO_BE_REPLACED
Add to Wish List

The Criminal Mind: Born or Made? - How might genes, brain structure, and environment conspire to make one person a criminal and another a rule-abiding citizen? We meet scientists working to uncover the biology of aggression - and explore the brain circuitry that could play a key role in the creation of a violent mind.

Death Detectives - Murder investigations often hinge on one critical detail: When did the victim die? But determining the time of death isn't as easy as it sounds. We explore the biological forces behind a corpse's decomposition, and witness how vultures can throw investigators off-track.

Secrets of Lie Detection - Can science spot a lie? Many polygraph tests are still done every year, although the technique is deeply flawed. David Pogue gets a primer on the biology of lying - what happens to our faces, our bodies, and our brains when we try to deceive?

Profile: Tadayoshi Kohno - We all know that hackers can tap into our computers. But did you know that they can also take control of our cars, medical devices, and kids' toys? In the effort to stay one step ahead of the criminals, computer scientist Yoshi Kohno hacks into everyday machines.