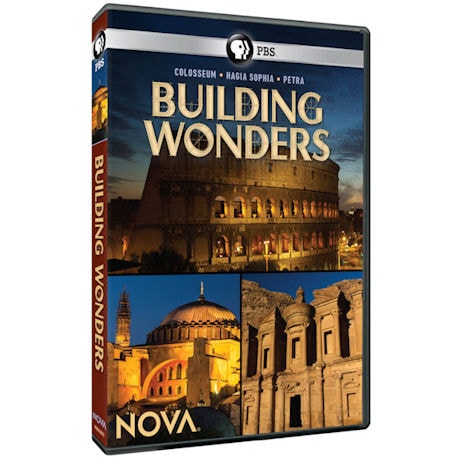 $29.99
3 Reviews Write a Review
Item #: WB8922
NOVA: Building Wonders In Building Wonders, NOVA presents three groundbreaking shows that investigate engineering mysteries of the ancient world with the help of dramatic hands-on experiments. Modern architects use medieval tools to figure out why Turkey's massive 1,500-year-old cathedral dome, Hagia Sophia, has survived countless quakes in one of the world's most violent seismic zones. In the middle of Jordan's END_OF_DOCUMENT_TOKEN_TO_BE_REPLACED
Add to Wish List

In Building Wonders, NOVA presents three groundbreaking shows that investigate engineering mysteries of the ancient world with the help of dramatic hands-on experiments. Modern architects use medieval tools to figure out why Turkey's massive 1,500-year-old cathedral dome, Hagia Sophia, has survived countless quakes in one of the world's most violent seismic zones. In the middle of Jordan's parched desert, a NOVA team investigates the Lost City of Petra, once a thriving metropolis of temples, markets, and spectacular tombs carved into cliffs. And in Rome, NOVA explores how the ancient Romans built the vast Colosseum so they could reenact naval battles and stage spectacles involving hundreds of gladiators and wild animals.

Colosseum - Roman Death Trap - One of the ancient world's most iconic buildings, the Colosseum is a monument to Roman imperial power and cruelty. Its graceful lines and harmonious proportions concealed a highly efficient design and advanced construction methods that made hundreds of arches out of 100,000 tons of stone. But this building is more than just an architectural giant - in its heyday it was filled with unbelievable spectacles and 50,000 cheering fans. In its elliptical arena, tens of thousands of gladiators, slaves, prisoners, and wild animals met their deaths. Ancient texts report lions and elephants emerging from beneath the floor, as if by magic, to ravage gladiators and people condemned to death. Then, just as quickly, the Colosseum could be flooded with so much water that ships could engage in sea battles to the delight of the crowd. Could these legends be true, or are they just myth? Now, with extraordinary access to one of the world's most protected world heritage sites, archaeologists and engineers are teaming up to recreate ancient Roman techniques to build a 25-foot lifting machine and trap door system capable of releasing a wolf into the Colosseum's arena for the first time in 1500 years. To do it, they will have to decipher ghost-like impressions left on the crumbling walls of the Colosseum's basement by the original lifts and then transform them into working plans for construction. Do they have what it takes to replicate the innovation and ingenuity of the Romans? (TV-PG,V)

Petra - Lost City of Stone - More than two thousand years ago, the thriving city of Petra rose up in the bone-dry desert of what is now Jordan. An oasis of culture and abundance, the city was built by wealthy merchants whose camel caravans transported incense and spices across hundreds of miles from the Arabian Gulf. They carved spectacular temple-tombs into its soaring cliffs, raised a monumental Great Temple at its heart, and devised an ingenious system that channeled water to vineyards, bathhouses, fountains, and pools. But following a catastrophic earthquake and a slump in its desert trade routes, Petra's unique culture faded and was lost to most of the world for nearly a thousand years. Now, in a daring experiment, an archaeologist and sculptors team up to carve an iconic temple-tomb to find out how the ancient people of Petra built their city of stone. And beyond Petra's city of the dead, scientists using remote sensors and hydraulic flumes discover a city of the living - complete with a water system that not only supplied 30,000 people with enough to drink, but also filled bathhouses, fountains, and pools with such abundance that some scholars believe this desert metropolis may have been the Las Vegas of the ancient world. The race is on to discover how these nomads created this oasis of culture in one of the harshest climates on earth, and ultimately, why Petra disappeared. (TV-PG)

Hagia Sophia - Istanbul's Ancient Mystery - The soaring dome of Hagia Sophia dominates Istanbul's skyline. Whether serving as Christian church, Islamic mosque, or secular museum, this magnificent building has inspired reverence and awe. For eight hundred years, it was the largest enclosed building in the world; the Statue of Liberty can fit beneath its dome with room to spare. How has it survived its location on one of the world's most active seismic faults, which has inflicted a dozen devastating earthquakes since it was built in 537 AD? As Istanbul braces for the next big quake, a team of architects and engineers is urgently investigating Hagia Sophia's seismic secrets. NOVA follows the team's discoveries as they examine the building's unique structure and other ingenious design strategies that have insured the dome's survival. At the climax to the show, the engineers build a massive 8-ton model of the building's core structure, place it on a motorized shake table and hit it with a series of simulated quakes, pushing it collapse - a fate that the team is determined to avoid in the real world. Hagia Sophia - Istanbul's Ancient Mystery is a detective story that reveals how this architectural wonder has proven so resilient for so long, and how it came to serve as a proud expression for the great civilizations that adopted it as a symbol. (TV-G)