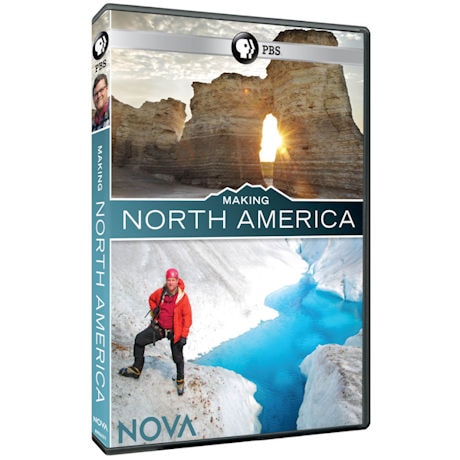 NOVA: Rise of the Drones DVD

America By The Numbers - The New Deciders DVD

Mighty, elemental forces molded North America. Fiery eruptions, titanic floods, the grinding of great ice sheets, and massive impacts from space all shaped our land. Now, for the first time, NOVA presents a bold and sweeping biography of our continent and how it came to be.

This epic story unfolds in a forgotten world that existed long before our own, crossed by long-lost mountain ranges, deserts the size of Africa, and vast inland seas spanning the length of the continent. Beloved landmarks like the Grand Canyon, Yellowstone, and the Rockies are explored from the inside out as we witness the clash of nature's creative and destructive forces - the uplifting of the earth's crust and the violent eruptions, earthquakes, and impacts that destroy it.
Hosted by renowned paleontologist Kirk Johnson, this spectacular road trip through our nation's tumultuous deep past sets out to answer three fundamental questions: How was the continent built? How did life evolve here? And how has its spectacular landscape shaped human lives and destinies? Enhanced by dazzling, hyper-realistic CGI animations, immersive geological field missions, and the latest scientific research, Making North America will reveal the incredible story of a majestic continent.