10% off Bestsellers with code 10BEST.
Sign up for E-Mail and receive 10% Off your first order
Every purchase supports public television for all
Previous
Next
Back 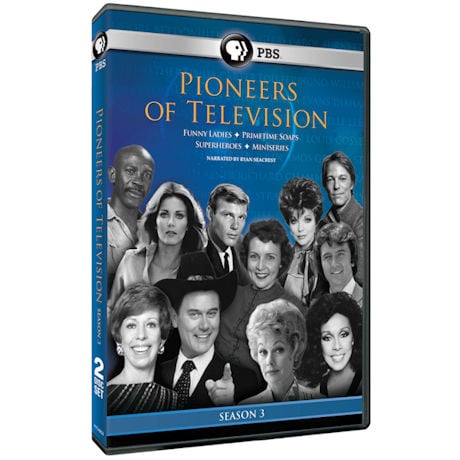 More than 100 stars from TV's formative years bring their stories to life in season three of the Emmy®-nominated documentary series PIONEERS OF TELEVISION. Narrated by Ryan Seacrest, each episode melds compelling interviews with irresistible archival clips to offer a fresh take on TV's breakthrough celebrities.

Superheroes - Superheroes crosses many eras: Superman in the 1950s, Batman in the '60s, Wonder Woman and The Incredible Hulk in the '70s, and The Greatest American Hero in the '80s. The episode features in-depth interviews with Adam West, Burt Ward, Julie Newmar, Lynda Carter, Lou Ferrigno, William Katt, and others.

Disc #2
- Adam West makes his case to be in the next Batman movie
- Burt Ward's origin story
- Louis Gossett Jr. on the impact of receiving an Oscar
- How John Amos' African accent almost got him killed