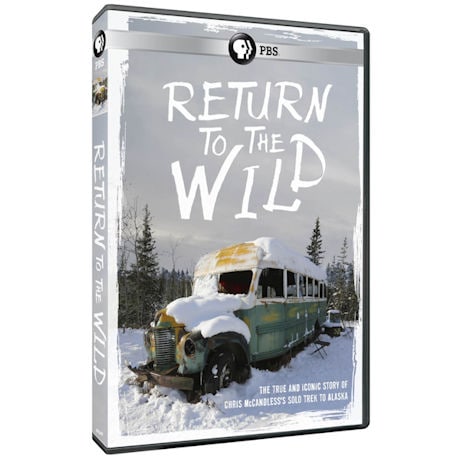 Return to The Wild - The Chris McCandless Story DVD

$19.99
4 Reviews Write a Review
Item #: WC1752
A journey in the footsteps of the enigmatic young American named Chris McCandless, who vanished and ultimately perished in the Alaskan wilderness. New interviews and never before released letters probe the mystery behind the best-selling book and movie "Into the Wild."
Add to Wish List

A journey in the footsteps of the enigmatic young American named Chris McCandless, who vanished and ultimately perished in the Alaskan wilderness. New interviews and never before released letters probe the mystery behind the best-selling book and movie "Into the Wild."

Return to The Wild - The Chris McCandless Story

Twenty years ago a young American hiker named Chris McCandless, the accomplished son of successful middle class parents, was found dead in an abandoned bus in the Alaskan wilderness and became the subject of the best-selling book and movie ""Into the Wild."" Now, PBS undertakes to retrace Chris McCandless' steps to try to piece together why he severed all ties with his past, burnt or gave away all his money, changed his name and headed into the Denali Wilderness. McCandless own letters, released for the first time , as well as new and surprising interviews probe the mystery that still lies at the heart of a story that has become part of the American literary canon and compels so many to this day.

3 star rating 4 Reviews
4 Reviews
M
Me T.
Anonymous User
4.0 star rating
07/17/20
More insightful than the movie!
Review by Me T. on 07/17/20 review stating More insightful than the movie!
Some may conclude this young man was simply misguided and ill-prepared for where life ultimately took him. However victims of abuse state that all forms of abuse - verbal, physical, sexual - can be equally devastating and it is also known that not only those at whom abuse is directed, but also those who witness abuse, are affected. This documentary shows how being raised in an environment of abuse changed how he saw life and chose to live it. His parents continue to live in oblivious denial two decades later, underscoring how this issue remains largely misunderstood and overlooked in todays society.
Return to The Wild - The Chris McCandless Story DVD
S
Sam
Anonymous User
5.0 star rating
07/17/20
Denial is powerful and common
Review by Sam on 07/17/20 review stating Denial is powerful and common
This is as heartfelt and real a story as it gets. So many of us keep family secrets and want to believe all families are generally the same or better. But,those who are courageous enough to see and speak the truth often find themselves blacklisted from the birth family. The families loss. Instead, shedding the secrets and lies leads to freedom and a true love of life.
Return to The Wild - The Chris McCandless Story DVD
S
Sheeple
Anonymous User
1.0 star rating
07/17/20
return to the wild
Review by Sheeple on 07/17/20 review stating return to the wild
i would not purchase this documentary or support it in anyway. i watched it sporadically as who want to see documentation of someones vileness to his parents and loved ones on a suicide mission. not entertaining, no matter how gently PBS/filmaker wants to make it. obviously this young man was troubled, needed strong intervention/counseling/medication early in his childhood.i would never donate to pbs because of shows like this and other documentaries portraying ongoing recorded abuse of boys in the Buddhist religion.
Return to The Wild - The Chris McCandless Story DVD
J
Jd
Anonymous User
2.0 star rating
07/17/20
The shame is on whom?
Review by Jd on 07/17/20 review stating The shame is on whom?
It appears that this young man suffered from Borderline Personality Disorder, and at least a couple of siblings as well. This is not only a challenging disorder diagnose and treat, but also a nightmare to understand. For PBS to become involved in a very destructive documentary that blames and accuses based on innuendo and perceptions based on potentially skewed perceptions of reality is alarming. Perhaps the public would be best served with a detailed documentary on the struggle families face dealing with BPD in the home.
Return to The Wild - The Chris McCandless Story DVD
Copyright © 2023 Public Broadcasting Service (PBS). All rights reserved.   PBS.org   PBS Mission   Privacy & Security   1-800-531-4727 1-833-565-0293