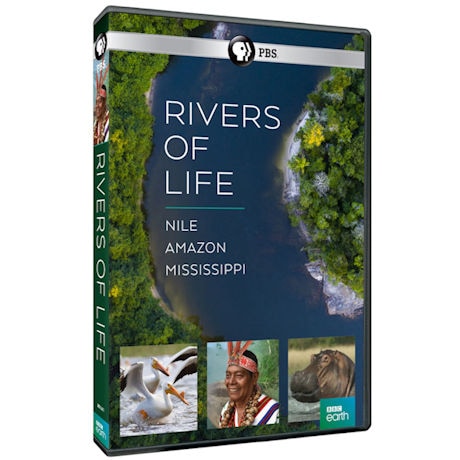 No Reviews Write the First Review
Item #: WC1872AV
Rivers of Life This landmark three-part series reveals the extraordinary animals, epic landscapes, and remarkable people who live alongside three iconic rivers. Using new technology and exclusive stories, Rivers of Life reveals a wider and fresh perspective on the extraordinary landscapes, surprising wildlife, and extraordinary people of the Nile, the Mississippi, and the Amazon. The Nile: The Nile is the END_OF_DOCUMENT_TOKEN_TO_BE_REPLACED
Add to Wish List

The Nile: The Nile is the world's longest river. From elephants and leopards to extreme kayakers and ancient wonders, its great length provides a lifeline for Africa's wildest beasts and for some of the world's most incredible cultures.

The Amazon: The Amazon, the greatest river system on Earth, amasses one-fifth of Earth's freshwater as it flows east from the Andes to the Atlantic. Boiling streams, crystal clear lagoons, pink river dolphins and a strange new reef are some of its many secret and extreme worlds.

The Mississippi: The Mississippi reaches far beyond the Deep South; its fingers stretch into nearly half of the USA. From the frozen north - where coyotes learn to fish in icy water - down through the nation's agricultural heart and then to the mysterious, steamy southern swamps where alligators still rule, the many faces of the Mississippi unite a nation.