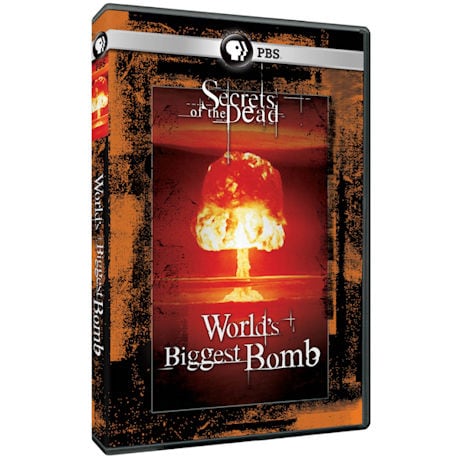 $24.99
6 Reviews Write a Review
Item #: WC2502
Beginning in the 1950s, American and Soviet scientists engaged in a dangerous race to see who could build and detonate the world's largest bomb. The results exceeded all expectations about how big a bomb   END_OF_DOCUMENT_TOKEN_TO_BE_REPLACED
Add to Wish List

Beginning in the 1950s, American and Soviet scientists engaged in a dangerous race to see who could build and detonate the world's largest bomb. The results exceeded all expectations about how big a bomb could be built. This is an epic story where the United States led the way, but then left the field clear for the Soviet Union to break all records. Terrifyingly, the bomb-makers on both sides were flying blind as they pushed the technology far into unknown territory.

The US bomb blast of March 1, 1954, known as 'Castle Bravo', is one of the most extraordinary tales in the history of science - yet one which is largely unknown. On that day the US exploded its first hydrogen bomb. To this day, it remains America's biggest bomb ever.

As soon as the vast fireball erupted, the test team knew something was desperately wrong. Instead of five megatons, the blast turned out to be fifteen megatons. The explosion vaporized three entire coral islands, sending the ash 100,000 feet into the air. What went wrong - and why? A forensic investigation using recreations, CGI, scientists and people present at the explosion will relate the dramatic chain of events which led to this explosion rearing out of control.

After the 'Castle Bravo' disaster, the US changed gears to building smaller, more precise bombs. At the same time though, the Soviet Union continued to build massive devices capable of destroying entire cities. The Soviet bomb program reached its zenith on October 30 1961, with a device they called the 'Tsar', exploded above the north European island of Novaya Zemlya. At 50 megatons, it released in a nanosecond, energy that equates to 10 times the entire quantity of explosives used in World War II. The blast wave went three times around the world. It made 'Castle Bravo' look insignificant. How were the Soviets able to detonate such a cataclysmic device without fear of nuclear fallout?

The story of the race to build the World's Biggest Bomb has never been fully told. But this fifty year anniversary (2011) provides the perfect opportunity share this chilling story with the world.

The Rise and Rise of Bitcoin DVD