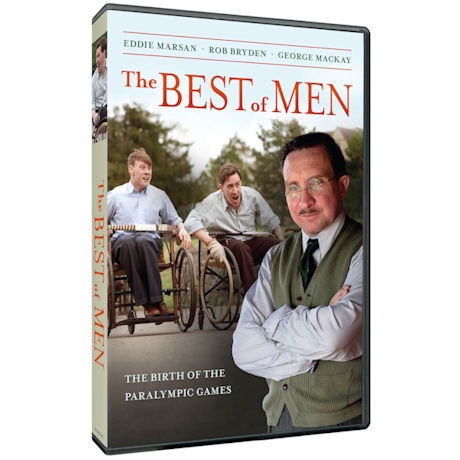 The Best of Men DVD

$24.99
6 Reviews Write a Review
Item #: WC3542
The Best of Men follows one remarkable doctor as he transforms the standards of care for paraplegics. Arriving at Stoke Mandeville Hospital in 1944, Doctor Guttman reinvigorates the lives of his staff and patients with one daring move: he introduces athletics into the rehabilitation plan of his patients, paralyzed soldiers who have been cast-off and are facing death from neglect.
Add to Wish List

The Best of Men follows one remarkable doctor as he transforms the standards of care for paraplegics. Arriving at Stoke Mandeville Hospital in 1944, Doctor Guttman reinvigorates the lives of his staff and patients with one daring move: he introduces athletics into the rehabilitation plan of his patients, paralyzed soldiers who have been cast-off and are facing death from neglect.

The Best of Men

The Best of Men tells the story of one remarkable doctor who revolutionized the care of paraplegics. Arriving at England's Stoke Mandeville hospital in the middle of World War II, Dr. Ludwig Guttman transformed the lives of his patients and staff. Indefatigable, charismatic, and entertaining, he refused to accept the idea that a broken back was a terminal condition. Having overcome extraordinary challenges in his own life, he insisted his patients do the same. He expected them to have relationships, jobs, and full lives. He used sport to challenge them physically and psychologically.

This heart-warming and uplifting film tells the true story of the birth of the Paralympic Games and celebrates the achievements of Sir Ludwig Guttmann, who started it all.

5 star rating 6 Reviews
6 Reviews
A
Angela
Verified Buyer
5.0 star rating
02/09/22
The best of men
Review by Angela on 02/09/22 review stating The best of men
Great movie!!
The Best of Men DVD
T
Theresa
Verified Buyer
5.0 star rating
09/17/21
The Best of Men DVD
Review by Theresa on 09/17/21 review stating The Best of Men DVD
This is an absolutely inspiring movie of the doctor who began the paralympic games in England following WWII. The doctor is such a positive force that men who thought they would never enjoy life again changed their attitude and learned to adjust to their handicaps. It is an extremely motivating movie for anyone who has lost hope for a happier life.
The Best of Men DVD
S
Smithers
Anonymous User
5.0 star rating
10/15/20
The Best Of Men
Review by Smithers on 10/15/20 review stating The Best Of Men
Very excellent show. We need to do more of this in real life today! Thanks
The Best of Men DVD
D
Dkw360
Anonymous User
5.0 star rating
10/15/20
Inspiring and Riveting!!
Review by Dkw360 on 10/15/20 review stating Inspiring and Riveting!!
The movie, based on a true story, is truly inspiring. It achieves the difficult goal of addressing a heartbreaking situation without leaving the viewer in tears, but rather, awed by the tenacity of the characters. I usually never want to see a movie more than once, but I bought this movie the very next day. Its a keeper!
The Best of Men DVD
C
Carol
Anonymous User
5.0 star rating
10/15/20
Excellent story and production
Review by Carol on 10/15/20 review stating Excellent story and production
This true account was well written and performed by genuinely appealing actors across the board. The scenes were to the point, with crisp believable dialogue and nuanced emotion. The sad condition of the wounded soldiers was nicely complemented by the strong character and positive outlook of Dr. Guttman. Each scene revealed a step taken by him toward better care of these men, as his actions produced a good response in them, winning their trust and affection until they called him Poppa. This movie shows the best of these British characters/actors. I was surprised at the ending, not expecting to see his accomplishment because I hadnt read the blurb first - that was a delightful reward to watching Dr. Guttmans work all along. The film is a reminder to me that helping those in need is the highest aim. I have watched the film 3 times in the last week and will show it at our retirement community movie night this Saturday. Five stars!
The Best of Men DVD
D
Doer
Anonymous User
5.0 star rating
10/15/20
Untitled
Review by Doer on 10/15/20 review stating Untitled
This is a moving and triumphant story -- very well acted and written, never descending into bathos -- that I have watched several times with such satisfaction that I have decided it belongs in my DVD collection. In my home.
The Best of Men DVD
Copyright © 2023 Public Broadcasting Service (PBS). All rights reserved.   PBS.org   PBS Mission   Privacy & Security   1-800-531-4727 1-833-565-0293