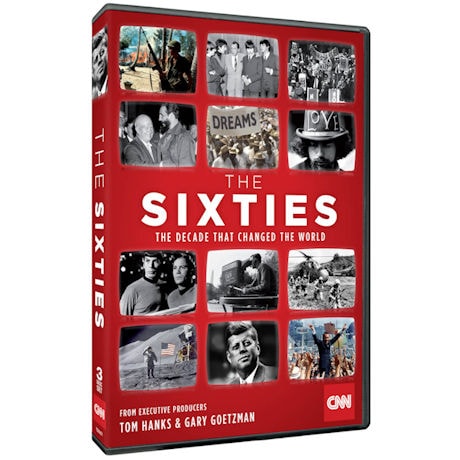 $69.99
11 Reviews Write a Review
Item #: WC4272
The Sixties Executive produced by Emmy® Award-winning producers Tom Hanks and Gary Goetzman (HBO's John Adams and The Pacific), and Emmy® Award-winning producer Mark Herzog (History's Gettysburg), The Sixties explores the most transformative decade of the modern era in America. The 1960s was the decade America transformed from a country of conformity to a land of political, cultural, and social END_OF_DOCUMENT_TOKEN_TO_BE_REPLACED
Add to Wish List

The 1960s was the decade America transformed from a country of conformity to a land of political, cultural, and social liberation. The events of that tumultuous ten-year period reshaped America to such an extent that it still remains an epoch of fascination today and every step of the way, television helped frame and enable that change. Looking through the lens of television, The Sixties weaves together the events and personalities that influenced and dominated the 1960s in America, sketching a portrait of this remarkable decade that is both entertaining and illuminating. Featuring unique perspective and rare, original footage, The Sixties will not just re-examine the familiar… it will unearth the unknown.

Episodes include (each approximately 42 minutes unless noted)…