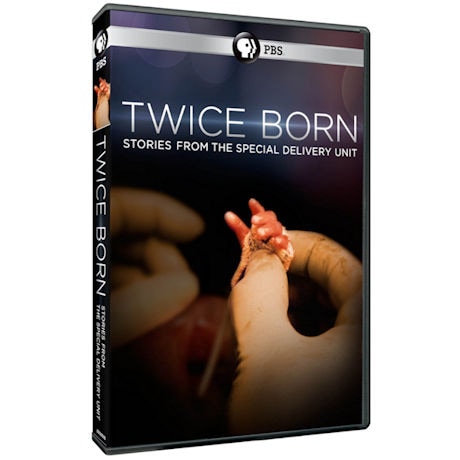 $24.99
7 Reviews Write a Review
Item #: WC4652
Twice Born: Stories from the Special Delivery Unit This three-part miniseries steps inside the groundbreaking medical frontier of fetal surgery with an intimate look at The Special Delivery Unit at The Children's Hospital of Philadelphia, where a courageous group of doctors and their patients take on the challenges of operations done on babies still inside their mother's wombs. With exclusive END_OF_DOCUMENT_TOKEN_TO_BE_REPLACED
Add to Wish List

This three-part miniseries steps inside the groundbreaking medical frontier of fetal surgery with an intimate look at The Special Delivery Unit at The Children's Hospital of Philadelphia, where a courageous group of doctors and their patients take on the challenges of operations done on babies still inside their mother's wombs.

With exclusive access to this elite unit, the film captures rarely-seen, real-time footage of fetal operations. Meet expecting parents as they face gut-wrenching decisions: should they take a leap of faith to repair birth defects with prenatal surgery, even if it means they might lose their child? And, hear firsthand from the unusual team of doctors who have defied skeptics and chosen to pursue this high-risk / high-reward career path.

5 star rating 7 Reviews
7 Reviews
M
Martha
Anonymous User
5.0 star rating
07/17/20
Miraculous!
Review by Martha on 07/17/20 review stating Miraculous!
This is incredible, what great advances in science!
Twice Born: Stories from the Special Delivery Unit DVD
S
Sooz; D.
Anonymous User
5.0 star rating
07/17/20
RIVETTING DOCUMENTARY
Review by Sooz; D. on 07/17/20 review stating RIVETTING DOCUMENTARY
Twice Born is easily among the top five documentaries Ive ever seen. Extremely well done and highly informative. Mothers to be face possible death of their critically ill fetuses. These true life dramas (no re-enactments)are depicted with superb skill and compassion. Viewers are drawn into the lives and interaction of doctors and mothers to be as they go through a difficult process to determine whether or not their babies qualify for the most delicate and dangerous of surgeries. The toll taken on both is evident with a close, personal look into their lives. It is heart-wrenching to say the least. This three part documentary is worthy of an award. Spell binding.
Twice Born: Stories from the Special Delivery Unit DVD
P
Pop P.
Anonymous User
5.0 star rating
07/17/20
Real Life
Review by Pop P. on 07/17/20 review stating Real Life
My granddaughter spent her first 6 months at C.H.O.P.! She underwent 6 major operations, the first performed by Dr. Adzick. Twice Born shows the stories as they really are. No punches are pulled. These Doctors are truly amazing people. And the staff in NICU West was very caring and professional, just as Twice Born shows them to be. The conferences with the parents brought back a lot of memories of what my son and daughter-in-law went thru, including the heart ache of having a sick child
Twice Born: Stories from the Special Delivery Unit DVD
K
Kathy R.
Anonymous User
5.0 star rating
07/17/20
Amazing stories!
Review by Kathy R. on 07/17/20 review stating Amazing stories!
An amazing miniseries! As a seasoned nurse who works with sick and premature infants, it was amazing to see the surgeries and what CHOP could offer to help save these babies. To think that the quality of life could be improved so much makes the effort so worthwhile. This series also deals with the emotional roller coaster that occurs with these cases. It also addresses the stresses of the medical staff and how they cope. A wonderful miniseries that would interest anyone with children, anyone in the medical/science professions or anyone with a curiosity on the subject of fetal surgery. Well worth your time...
Twice Born: Stories from the Special Delivery Unit DVD
D
Di B.
Anonymous User
5.0 star rating
07/17/20
Amazing Series
Review by Di B. on 07/17/20 review stating Amazing Series
This series gives us an incredible insiders view to maybe the most advanced hospital in the world, and the families who come for help. You cannot help but feel for the parents and families when they receive such difficult news about their unborn child. Dr. Adzick and the team at CHOP are just phenomenal. They are true Heroes who save the lives of our babies. Thank you for this amazing series on CHOP!
Twice Born: Stories from the Special Delivery Unit DVD
U
Ultra A.
Anonymous User
5.0 star rating
07/17/20
Excellent portrayal of both sides of fet
Review by Ultra A. on 07/17/20 review stating Excellent portrayal of both sides of fet
excellent portrayal of both sides of fetal surgery
Twice Born: Stories from the Special Delivery Unit DVD
M
Mom H.
Anonymous User
5.0 star rating
07/17/20
Phenomenal Series
Review by Mom H. on 07/17/20 review stating Phenomenal Series
This series provides an excellent insight into the programs offered at CHOP, and the emotional turmoil faced by the families treated there. I was a patient of the center, and my son was born there, spent 2 weeks on NICU West before and after surgery. The staff of this hospital is unmatched, and we wont go anywhere else. Myself and my son received the best care at this hospital and this series was a testament to the families, staff, and children affected by prenatal complications.
Twice Born: Stories from the Special Delivery Unit DVD
Copyright © 2023 Public Broadcasting Service (PBS). All rights reserved.   PBS.org   PBS Mission   Privacy & Security   1-800-531-4727 1-833-565-0293