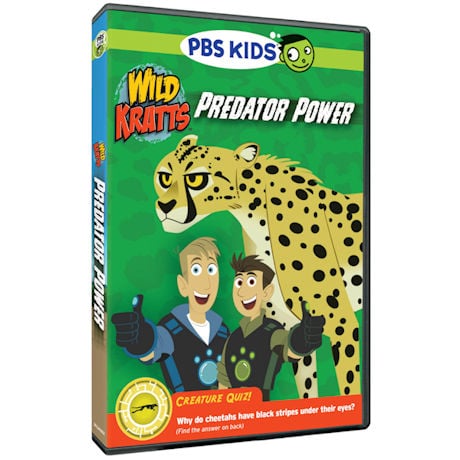 No Reviews Write the First Review
Item #: WC5022
Wild Kratts: Predator Power episodes include… Stuck on Sharks - Martin and Chris are on a mission to uncover the secret life of the mysterious Great White Shark. They use Aviva's incredible Remora   END_OF_DOCUMENT_TOKEN_TO_BE_REPLACED
Add to Wish List

Wild Kratts: Predator Power episodes include…
Stuck on Sharks - Martin and Chris are on a mission to uncover the secret life of the mysterious Great White Shark. They use Aviva's incredible Remora Rocketsub to ""stick with"" a female shark and soon learn that the giant predator of the sea actually has lots of challenges to contend with and that she could help them discover something that no one has ever seen before - the birth of Great White shark pups. But when Gourmand sniffs around looking for ingredients for his Shark Fin Soup recipe, the Wild Kratts team must help rescue their new friend.

Mimic - While exploring why some animals mimic the looks of others, Martin and Chris encounter a cheetah cub and its mom. But before they know it, evil fashion designer, Donita Donata, 'cat-naps' the startled mom right in front of their eyes. The Wild Kratts team springs into action on a rescue mission before Donita adds the momma cheetah to her new fall line. Martin discovers that the cheetah cub has unexpected powers of mimicry, and it's ability to mimic the ferocious honey badger - is the key to foiling Donita and protecting the cheetah.

Little Howler - Chris and Martin are unpacking from an adventure and are surprised when a Wolf pup pops out of their bags. They have no idea where the little guy came from and must retrace their steps in order to return him back to his pack. They experience that wolves are a very social animal with a close pack structure and frequent visual and audio communication among individual members. With this knowledge and wolf-powered Creature Power Suits the bros are able to fend off a hungry cougar and finally return the pup to his wolf pack.

Raptor Roundup - Martin and Chris challenge themselves to ID as many hawks, eagles, owls, falcons and vultures as they can. But the evil endangered species chef, Gaston Gourmand has his own plan for the raptors and has been capturing them all in his quest to find the tastiest bird wing. Will the Wild Kratts team succeed in rescuing the raptors before they become Gourmand's next gourmet delicacy? They'll have to use everything they know about classification and birds of prey - to round up the raptors and return them to where they belong - living free and in the wild!

Memoirs of a Geisha (Paperback)

NOVA: Back to the Moon DVD