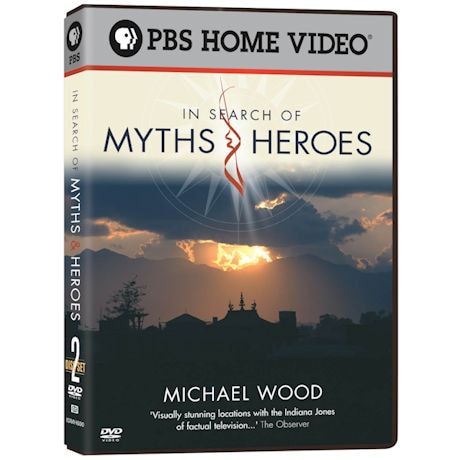 $34.99
8 Reviews Write a Review
Item #: WC7072
Michael Wood embarks on four quests from Greek, Celtic, Biblical and Indian myth. Each journey opens up universal themes as Michael goes in search not only of the historical past and literal truth, but also of the mythic past and archetypal stories that reflect and have sustained human existence since the beginning of time.
Add to Wish List

Michael Wood embarks on four quests from Greek, Celtic, Biblical and Indian myth. Each journey opens up universal themes as Michael goes in search not only of the historical past and literal truth, but also of the mythic past and archetypal stories that reflect and have sustained human existence since the beginning of time.

5 star rating 8 Reviews
8 Reviews
C
Constant L.
Anonymous User
5.0 star rating
06/12/22
Excellent Mixture of Present and Past
Review by Constant L. on 06/12/22 review stating Excellent Mixture of Present and Past
Its wonderful the way Wood weaves modern footage, ancient myth, archaeology, politics and cultural information in this film. He takes us to the Caucasus, the Himalayas, and Medieval England in the blink of an eye and makes them all as alive as our backyard, but filled with fascinating layers of cultural myth and societal change. Im a PhD in Literature, but I learned from this and wondered at the places he took us.
Michael Wood: In Search of Myths and Heroes DVD 2PK
S
Shelly
Anonymous User
5.0 star rating
06/12/22
In Search of Myths and Heros - SoulFood
Review by Shelly on 06/12/22 review stating In Search of Myths and Heros - SoulFood
This is an awesome experience. I bought this DVD set a couple of years ago and it is still my favorite chill out and relax DVD to watch. I love all four of the historical stories. I say stories because Michael Wood is an excellent story teller - fun part is that the story is based on historical evidence. Lovely relaxer. My personal favorite episode is Jason and the Golden Fleece. I must have watched it over 150 times now. I still love to watch that one and the others. Lots of fun for the historical travel buffs.
Michael Wood: In Search of Myths and Heroes DVD 2PK
D
David
Verified Buyer
5.0 star rating
01/21/22
For those with a love of history and critical thinking
Review by David on 01/21/22 review stating For those with a love of history and critical thinking
Lets face it. Anything Michael Wood produces, is the gold standard. He is Englands Ken Burns of documentaries.
Michael Wood: In Search of Myths and Heroes DVD 2PK
S
Steve D.
Anonymous User
5.0 star rating
07/17/20
An excellent series- eager for the next release.
Review by Steve D. on 07/17/20 review stating An excellent series- eager for the next release.
Intriguing presentations of lore blended with factual, historical references that may serve to explain the origins of the stories. The pacing of each show is extremely engaging and the conclusions are satisfying, leaving the viewer with new facets of each tale to consider and anxious for additional discoveries.
Michael Wood: In Search of Myths and Heroes DVD 2PK
J
Judy
Anonymous User
5.0 star rating
07/17/20
Just what I wanted
Review by Judy on 07/17/20 review stating Just what I wanted
Wanted to be able to share my travel experiences with grandchildren.
Michael Wood: In Search of Myths and Heroes DVD 2PK
N
N&R
Anonymous User
5.0 star rating
07/17/20
Most informative and entertaining
Review by N&R on 07/17/20 review stating Most informative and entertaining
My wife and I are both thoroughly well educated in the humanities. Mr. Wood has a genius for developing and presenting a fresh perspective with a deepening clarity that entertains while it unveils and instructs the viewers about historical and literary truths. We have felt our knowledge affirmed and also enjoyed feeling it grow as we watch these films. -- Norm Ruth
Michael Wood: In Search of Myths and Heroes DVD 2PK
P
Pbr
Anonymous User
5.0 star rating
07/17/20
A Day Early and a Penny Long
Review by Pbr on 07/17/20 review stating A Day Early and a Penny Long
It is difficult to tell how many nations have succumbed to the myth of a monarchy upon the basis of the Stories of Arthur and the Knights of the Round Table, but surely there have been many. The influence of England and its evolution in international history, (as identified by Wood from his presentation of the myth of Arthur) deserves far more than mere info-tainment treatment. It deserves serious scholarly treatment of the human approach to its political, psychological, and economic existence, and how that is organized in every nation. The attempt to discover the accuracy with which Wood portrayed the mythological/historical events in the development of Arthur as King may lie at the root of humanities ills, and surely needs a gender perspective that isnt purely male in origin, as women may take a far different perspective of the tales of Britains origin, and the message within the medium of Arthur as handed down by the Celts. The Celtic version is obviously far different than the British version of the tales, and that gap deserves reconciliation that is not likely to come from mere artistry and theatrics. The hint of religious conversion from Catholicism to Protestantism should not be overlooked in a distortion of the tale in retrospect as it provides the divergence of the two cultures, in retrospect. Sensing study groups in the offing, the introduction by Wood should be capitalized upon to recreate its potential, a rebirth of human history that seeks to fuse the parallel universes into one complete whole, for the benefit of mankind. Can myths so heavily invented, and invested upon be summarily dismissed as innocent diversions? Whether intended or not, Wood has surrepticitiously opened the Pandoras box of modern human history to view the myths as truth. And that deserves considerably greater scrutiny to reveal its full and complete impact upon every cultures human history.
Michael Wood: In Search of Myths and Heroes DVD 2PK
M
Mrs. H.
Anonymous User
5.0 star rating
07/17/20
Produced amazing results from students
Review by Mrs. H. on 07/17/20 review stating Produced amazing results from students
These quest companions in addition to the lesson plans provided on the PBS website produced amazing results from my students. This resource material is interesting and helful to and for visual/auditory learners. I highly recommend this series for teachers as a companion to fruitful project opportunities.
Michael Wood: In Search of Myths and Heroes DVD 2PK
Copyright © 2023 Public Broadcasting Service (PBS). All rights reserved.   PBS.org   PBS Mission   Privacy & Security   1-800-531-4727 1-833-565-0293