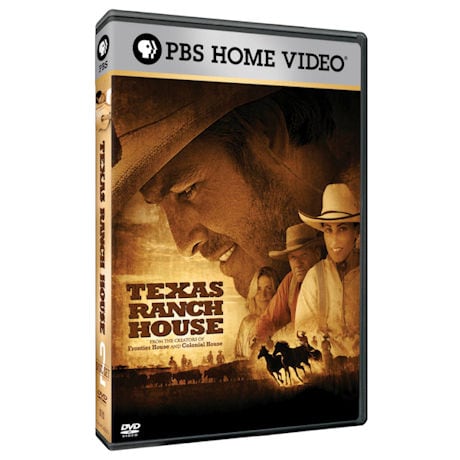 $49.99
7 Reviews Write a Review
Item #: WC7332
110 degrees. 200 cows. 47,000 acres. And 15 people. Can they make it? Welcome to Texas, 1867, where modern-day time-travelers find themselves struggling to get a real-life ranch up and running. Narrated by native Texan and actor Randy Quaid, Texas Ranch House follows the daily life of a brave and diverse group of cowboys-at-heart who discover how the myth of END_OF_DOCUMENT_TOKEN_TO_BE_REPLACED
Add to Wish List

110 degrees. 200 cows. 47,000 acres. And 15 people. Can they make it? Welcome to Texas, 1867, where modern-day time-travelers find themselves struggling to get a real-life ranch up and running. Narrated by native Texan and actor Randy Quaid, Texas Ranch House follows the daily life of a brave and diverse group of cowboys-at-heart who discover how the myth of the American West meshes with reality and explore the country's diverse ancestry.

3 star rating 7 Reviews
7 Reviews
L
Linda
Anonymous User
4.0 star rating
05/21/22
Where are they now?
Review by Linda on 05/21/22 review stating Where are they now?
Now that the show has been off the air for a while, it would be interesting to see everyones opinions of the experience. Im sure theyve all seen the series. I wonder what they think of their own behavior in retrospect.
Texas Ranch House DVD 2PK
G
Geno
Anonymous User
1.0 star rating
12/28/21
Fantasy land!
Review by Geno on 12/28/21 review stating Fantasy land!
This is about as imbecilic a program as one can find on TV. The plot, the characters, the development, pretending to be 1860s people who know and show nothing but 2005 attitude. If you like fantasy, preposterousness,the inconceivable, this one is for you.
Texas Ranch House DVD 2PK
M
Mary
Anonymous User
2.0 star rating
12/28/21
Did not like it
Review by Mary on 12/28/21 review stating Did not like it
I have watched several of the other series of this type, and each and every family has to learn to live in the time period and not fight it. This series has gone off the rails. I have expected several times that an expert would come and counsel them, but there have not been any. I am just very disappointed with this show. It is more like a Survivor type of feel and my family just watches the show and then sits and complains about it for the next hour. I am only halfway through, so maybe it will get better, but I would not recommend this one!
Texas Ranch House DVD 2PK
J
John
Anonymous User
4.0 star rating
12/28/21
Texas Ranch exposes weaknesses
Review by John on 12/28/21 review stating Texas Ranch exposes weaknesses
The end interviews of the participates, tells all. If you have any farming experience, even just keeping a garden, this will show you how far ahead you are of most people, including the people in this show. At the same times that we saw their weaknesses, we also learn how the people of the time had to work to survive. I would watch it again given a chance.
Texas Ranch House DVD 2PK
L
Luz E.
Anonymous User
4.0 star rating
12/28/21
Who won the Big T?
Review by Luz E. on 12/28/21 review stating Who won the Big T?
This winners are the Indians. They came off the best. The rest of the participants acted like they were on an expensive but rustic vacation and quarreled over nothings, got soreheads when they should have been working hard, or were unable to rise to the demands of their situations. The narration was excellent; it pointed out that these playtime cowboys who didnt start work until midmorning were a far cry from the real ones back in the 1860s, who got up at dawn, tired out half a dozen horses during the day, and did,t quit until it got too dark. The women may have had a harder time, having to wear bundles of sweaty clothing in Texas heat and wash everything-- long skirts, pantalettes, crinolines, corsets, camisoles, blouses and shawls by hand, after cooking, pumping water, laundering, feeding animals and gardening dressed in all those layers. Small wonder they rebelled, and then, small wonder the men seemed to act like they were uglies and resented them instead of lending a hand. Only several of the participants had enough initiative to make a go of it-- the fashionnable girl who was supposed to be a domestic helper turned out to be an accomplished horsewoman, and she got into the saddle and rode in the cattle drive, even when the men tried to freeze her out. And also the young man who came from a home schooled family who took over the job of cook after the first participant proved totally incompetent. I guess it is just as true today as it was in 1867, that people with backbone, grit and initiative will turn adverse conditions to their benefit. A lesson we all could learn again!
Texas Ranch House DVD 2PK
T
Tommy
Anonymous User
5.0 star rating
12/28/21
The Best PBS Reality Show
Review by Tommy on 12/28/21 review stating The Best PBS Reality Show
Very interesting to watch, if you like outdoors, cowboys, horses, country living, and a great adventure this is it! A must see.
Texas Ranch House DVD 2PK
S
Sulamramot
Anonymous User
1.0 star rating
07/17/20
THAT Woman...ruined the show!
Review by Sulamramot on 07/17/20 review stating THAT Woman...ruined the show!
The wife was utterly the ruin of this show. I cant imagine a woman from that period behaving in that way and bottom line that is who she really is which is sad. There was mutiny because of her!
Texas Ranch House DVD 2PK
Copyright © 2023 Public Broadcasting Service (PBS). All rights reserved.   PBS.org   PBS Mission   Privacy & Security   1-800-531-4727 1-833-565-0293