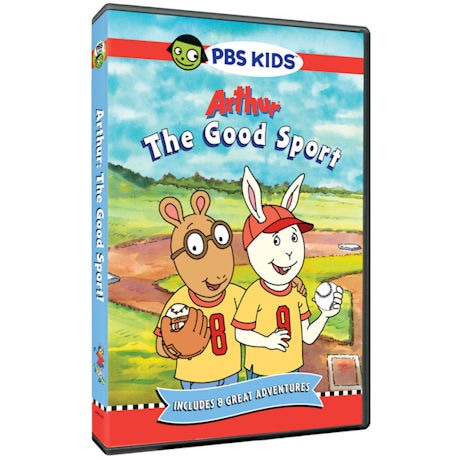 Based on the best-selling children's books by Marc Brown, join the world's most famous aardvark, eight-year-old Arthur Read, and his family and friends on these great adventures!

The Curse of the Grebes - The Elwood City Grebes haven't won the Baseball Championship since 1918. But with the addition of three players -- voiced by real-life Red Sox players Johnny Damon, Mike Timlin, and Edgar Renteria! -- the title is finally within reach. There's one problem: Whenever Buster is at the game, the Grebes lose! Is Buster the team's curse?! Or can the players convince Buster that his loyalty as a fan is more valuable to them than winning?

Arthur Changes Gears - Arthur finally saves enough money to buy the bike of his dreams! But...this new bike is way too nice to actually ride. What if it gets wet? Or dirty?! It takes the whole gang -- plus a special visit by the Ghost of Bikes Never Ridden -- to convince Arthur that his treasured possession is better off being enjoyed than kept on display.

Room to Ride - Lance Armstrong makes a special trip to Elwood City in this episode about bicycling and good citizenship. Wanting more room to ride, Binky and his friends take to the streets to convince residents to vote for new bike safety lanes. When all hope seems lost, Lance gives Binky support and encouragement never to give up his cause.

The Good Sport - When the Athlete of the Year Award doesn't go to Francine, she makes no effort to hide her hurt feelings from Jenna, the recipient. Michelle Kwan, world champion figure skater and graduate of Lakewood Elementary (who knew?), guest stars to teach Francine about good sports(wo)manship.

Arthur Makes the Team - Arthur's playing baseball on a team with Binky, Buster, Francine and The Brain. Can Coach Frensky work with a team where everyone is fighting about who gets to be pitcher and no one wants to practice?