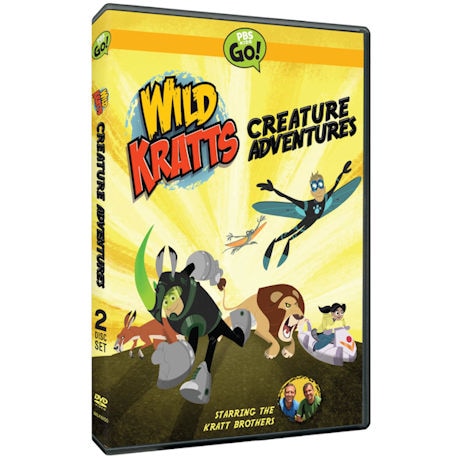 $19.99
24 Reviews Write a Review
Item #: WC7782
Join the adventures of Martin and Chris as they meet up with cool creatures from around the world - and witness many never-seen-before wildlife moments. With their creature smarts plus their newly invented Creature Power Suits, the brothers Kratt are using amazing animal abilities to rescue their animal friends when they get into trouble. Each episode is a wildly funny END_OF_DOCUMENT_TOKEN_TO_BE_REPLACED

Join the adventures of Martin and Chris as they meet up with cool creatures from around the world - and witness many never-seen-before wildlife moments. With their creature smarts plus their newly invented Creature Power Suits, the brothers Kratt are using amazing animal abilities to rescue their animal friends when they get into trouble. Each episode is a wildly funny adventure that also features how animals use science in their natural lives, from meeting a draco lizard who uses the physics of gliding to the aardvark who takes us into geology as he digs holes for so many African animals. Saving the planet with creature power!

Episodes include…
Mom of a Croc - Chris and Martin are determined to prove to Aviva that there's more to crocodiles than their reputation as scary brutes. They use an egg disguise, created by Aviva, to infiltrate a crocodile nest for an insider's look at the challenging journey of the infant crocs and their mom.

Whale of a Squid - Chris and Martin are taking Aviva's sub prototype out for a test drive when it gets sucked into a battle between a Sperm whale and Giant squid, spiraling down into the depths. The brothers want to follow, but their damaged sub can't take that kind of pressure. Aviva develops whale and squid Creature Power Suits, so the brothers can go where no sub has gone before.

Aardvark Town - When a young aardvark accidentally becomes a stowaway in Chris's backpack, the Wild Kratts team sets off on a ""door to door"" search to return him to his home burrow. Along the way, they discover the incredible (and valuable) service the aardvark provides to all the burrow-living creatures of Africa.

Flight of the Draco - While on a mission to discover the secret of the Draco lizard's gliding abilities, Martin and Chris uncover an evil plot by fashion designer, Donita Donata. She has been capturing these amazing creatures with a plan to make them part of her new Fall collection. It's the Wild Kratts team to the rescue!

Mystery of the Squirmy Wormy - Aviva miniaturizes Chris and Martin for an underground mission with earthworms, in search of the answer to the mystery ""Why do worms come above ground when it rains?"" But they have to hurry, as they soon discover that life as a worm is full of dangers at every turn.

Platypus Café - While kayaking in Australia, Martin and Chris encounter one of the world's most unusual creatures, a platypus mother with her eggs. But unscrupulous endangered animal chef, Gourmand, plans on making the platypus eggs his next delicacy. The Wild Kratts team must use the special ""sixth sense"" of the platypus to save the eggs.

Build it Beaver - The Wild Kratts team must lend a hand to help a beaver rebuild its damaged lodge and restore the ecosystem for all the creatures who live there.

Voyage of the Butterflier XT - Using Aviva's newly invented Butterflier XT, the miniaturized Kratt Brothers embark on the most incredible insect voyage in the world - the Monarch butterfly's 2,000 mile migration.

Honey Seekers - While on an adventure to discover the toughest animal in Africa, Martin and Chris uncover the amazing relationship between the Honey guide bird and Honey badger. A relationship that the Wild Kratt team uses to foil the evil plans of Chef Gourmand.

Bass Class - Martin and Chris are in the middle of a friendly competition to find Small-mouth and Large-mouth Bass when they meet Wild Kratts Kid, Gavin, who is fishing. Before they can join him, Zach Varmitech arrives and challenges them to a fishing contest. The Wild Kratts team must use their knowledge of bass biology to win the tournament fair and square.