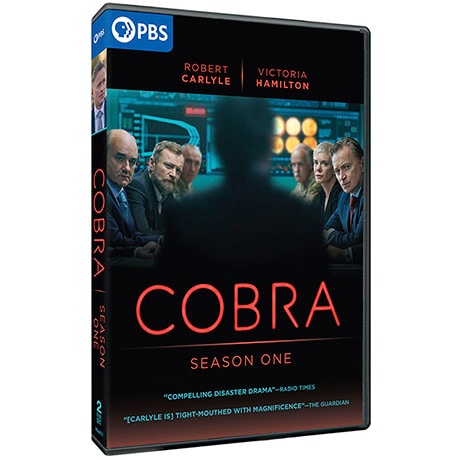 $39.99 $22.99
4 Reviews Write a Review
Item #: WC8392DV
COBRA follows the Prime Minister and his titular committee, comprised of leading contingency planners and senior politicians, as they navigate the difficulties in overcoming a major national crisis.
Eligible for Buy 5 for $79 select DVDs/Blu-rays. Discount applies in cart.
Add to Wish List

COBRA follows the Prime Minister and his titular committee, comprised of leading contingency planners and senior politicians, as they navigate the difficulties in overcoming a major national crisis.

COBRA
In times of national emergency, a team comprised of Britain's leading experts, crisis contingency planners and the most senior politicians assemble under the name COBRA to form the committee entrusted to protect the people of Great Britain and steer the nation through the storm.

Set in the heart of government during a major crisis, COBRA hurls us both into the corridors of power in Westminster and the center of disaster in the crisis zone. We follow the Prime Minister, Robert Sutherland (Robert Carlyle); his Chief of Staff, Anna Marshall (Victoria Hamilton); the Head of the Civil Contingencies Secretariat, Fraser Walker (Richard Dormer) and the Home Secretary, Archie Glover Morgan (David Haig) amongst other key advisers and apparatchiks. Not only are they and their contemporaries forced to quickly contend with impossible political decisions and their ferociously pressured personal lives, but they must also be mindful of political opponents who will use any sign of weakness and any failure within the handling of the crisis as an opportunity to strike.

Episode 1
As a major crisis threatens the stability of the UK, the Prime Minister Robert Sutherland and his close team assemble the emergency committee ""COBRA"" in an effort to combat the situation.

Episode 2
With the nation experiencing one of the worst crises in UK history, the Prime Minister and his team are forced to work around the clock. Meanwhile Anna reconnects with a face from her past.

Episode 3
As the country continues to face dark days, the PM, Anna, Fraser and their teams pay a visit to the worst affected area. Meanwhile, Archie's rhetoric threatens to cause more problems for everyone.

Episode 4
As questions are asked about the PM's personal life, Anna seeks the help of intelligence chief Eleanor James. Meanwhile, a new threat rears its head as public sentiment grows ever more turbulent.

Episode 5
With the crisis worsening, Fraser must address issues in his personal life. Meanwhile the Prime Minister is forced to consider more extreme measures to retain control and apply order over the country.

Episode 6
As the crisis reaches boiling point, Fraser and his team reach the endgame while the Prime Minister and Anna are forced to fight for their political lives, with Archie firing his first shots."