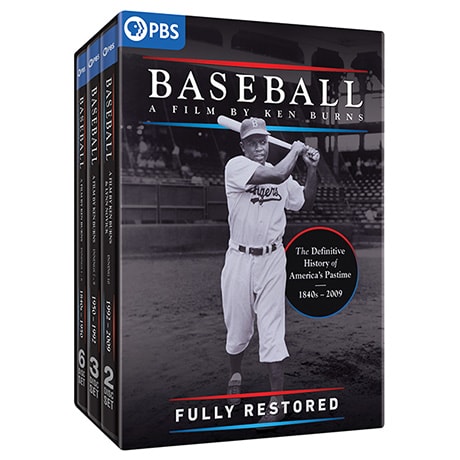 $99.99
8 Reviews Write a Review
Item #: WD2002
The complete Emmy® Award-winning story of America's national pastime from master storyteller Ken Burns is now fully restored! Baseball spans the quest for racial justice, the clash of labor and management, the immigrant experience, the transformation of popular culture and the enduring appeal of the national pastime.
Add to Wish List

The complete Emmy® Award-winning story of America's national pastime from master storyteller Ken Burns is now fully restored! Baseball spans the quest for racial justice, the clash of labor and management, the immigrant experience, the transformation of popular culture and the enduring appeal of the national pastime.

Inning 1: Our Game (1840s – 1900)
On June 19, 1846, at the Elysian Fields in Hoboken, New Jersey, a team of well-dressed gentlemen, the Knickerbockers, play the first game of baseball. By 1856, the game is already being called ""the national pastime,"" or simply, ""Our Game."" But the nation is about to be torn apart. And, in the midst of the Civil War, there is one thing that Americans North and South have in common: baseball.

Inning 2: Something Like a War (1900 – 1910)
In 1894, a sportswriter named Byron Bancroft Johnson takes over a struggling minor league and turns it into a financial success. In 1900, he changes its name to the American League and begins talking about challenging the big city monopoly held by the National League. In 1903, the first World Series is played between the American League Boston Pilgrims and the National League Pittsburgh Pirates.

Inning 3: The Faith of Fifty Million People (1910 – 1920)
A steady stream of immigrants land on the shores of America. They instantly want to become American. To play the American game. But even as new Americans pick up a ball for the first time, even as the country endures a world war, baseball is trying to endure a decade that includes the meanest, vilest, angriest player ever to step onto the field and a scandal that almost destroys the game.

Inning 4: A National Heirloom (1920 – 1930)
The 1920s begin with America trying to recover from World War I and baseball trying to recover from the scandal of the 1919 World Series. America finds relief in the boom market and the Jazz Age. George Herman ""Babe"" Ruth is one of the best pitchers in baseball. But he loves to hit even more. In 1919, he hits 29 homers for the Red Sox, more than any player has ever hit in a single season.

Inning 5: Shadow Ball (1930 – 1940)
As America struggles to make it through the Depression, baseball provides them heroes. But the heroes do not come only from the Major Leagues. The Negro Leagues bring baseball to towns the Major Leagues ignore. They develop an elaborate warm-up routine in pantomime; throwing and hitting an invisible ball so convincingly, spectators can't believe it's not real. It's called ""shadow ball.""

Inning 6: The National Pastime (1940 – 1950)
When the war ends, Major League Baseball becomes what it has always claimed to be: the national pastime. At the beginning of the decade, Jackie Robinson's debut is still years away. Meanwhile, Joe DiMaggio sets a consecutive game-hitting streak that still stands. Ted Williams becomes the last man to hit .400. The once-lowly Brooklyn Dodgers win their first pennant.

Inning 7: The Capital of Baseball (1950 – 1960)
If you're a baseball fan in New York, you're in baseball heaven. Year after year, the Yankees are on top of the American League. Year after year, the Giants and the Dodgers fight for the National League crown. Starting in 1949, there is a New York team in the World Series for 10 straight years. And in six of those years, both teams are from New York.

Inning 8: A Whole New Ballgame (1960 – 1970)
The 1960s are a turbulent decade for America. It is also a turbulent decade for baseball. It starts with Bill Mazeroski bringing down the Yankees with one dramatic home run. Then, in 1961, Roger Maris pursues Babe Ruth's ""untouchable"" record. In 1962, the Brooklyn Dodgers and the New York Giants are replaced by the New York Mets, who compile the worst single season record of the century.

Inning 9: Home (1970 – 1992)
America and the world are seeing more changes than at any time in history. And so is baseball. Free agency, multimillion-dollar salaries, the designated hitter, a shocking gambling scandal, a new all-time home run champion, a World Series victory for Canada. And yet, paradoxically, the game remains timeless—still played the same way it was in our fathers' and grandfathers' time.

Inning 10: Top of the Tenth (1992 – 1999)
In an age of globalization and deregulation, a cataclysmic strike over money and power brings baseball to the brink. Cal Ripken becomes baseball's new Iron Man, sluggers Mark McGwire and Sammy Sosa smash records, and The Braves dominate the National League while the Yankees build a new dynasty. Meanwhile, players must make decisions about how far they are willing to go to succeed.

Bottom of the Tenth (1999 – 2009)
In the fall of 2001, when a badly frightened country yearns for normalcy, baseball helps provide it. In an epic battle with the Yankees, the benighted Boston Red Sox stage the greatest comeback in history. Baseball is more popular and profitable than ever, but suspicions and revelations about performance enhancing drugs keep surfacing, calling the integrity of the game itself into question.