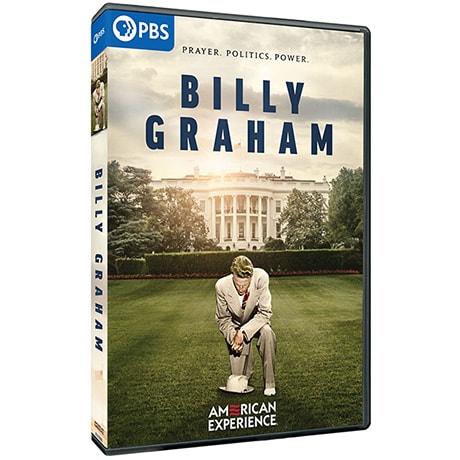 $24.99
1 Review Write a Review
Item #: WD5162DV
Billy Graham explores the life and career of one of the best-known religious leaders of the 20th century and examines the evangelist’s extraordinary influence on American politics and culture.
Add to Wish List

Billy Graham explores the life and career of one of the best-known religious leaders of the 20th century and examines the evangelist’s extraordinary influence on American politics and culture.

From modest beginnings on a North Carolina farm, Graham rose to prominence with a fiery preaching style, movie-star good looks and effortless charm. His early fundamentalist sermons harnessed the apocalyptic anxieties of a post-atomic world, exhorting audiences to adopt the only possible solution: devoting one's life to Christ. Graham became an international celebrity who built a media empire, preached to millions worldwide, and had the ear of tycoons, royalty and presidents. At age 99, he died a national icon, estimated to have preached in person to 210 million people. Billy Graham examines the evangelist's extraordinary influence on American politics and culture, interweaving the voices of historians, scholars, witnesses, family, and Graham himself, to create a kaleidoscopic portrait of a singular figure in the American experience.

5 star rating 1 Review
1 Review
J
Julie T.
Verified Reviewer
5.0 star rating
07/22/21
Billy Graham
Review by Julie T. on 07/22/21 review stating Billy Graham
I always enjoy the documentaries on PBS! The Billy Graham piece was quite good! I especially enjoyed the wide-range of his history, and American history that was covered, beginning in Charlotte, North Carolina, and then world-wide. I think the documentary did a wonderful job of showcasing his humble beginnings, his failures, and his successes. Now, I tell you this: I am from Charlotte, and my grandfather and Billy were first cousins. I write this because there were things in the documentary that I never knew. I am also not that religious, but the power of his message resonated. Whoever put this documentary together, made it a work of art!
American Experience: Billy Graham DVD
Copyright © 2023 Public Broadcasting Service (PBS). All rights reserved.   PBS.org   PBS Mission   Privacy & Security   1-800-531-4727 1-833-565-0293