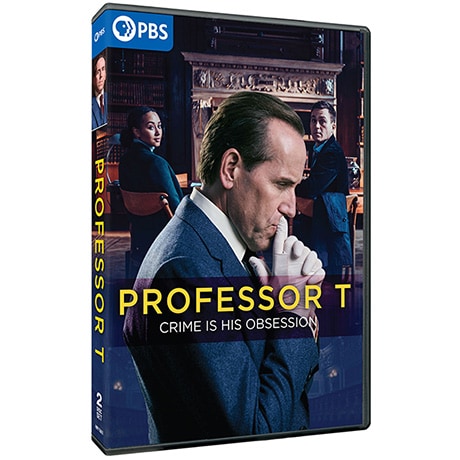 $39.99 $29.99
3 Reviews Write a Review
Item #: WD5172DV
Jasper Tempest is a Professor of Criminology at Cambridge University. He is obsessed with cleanliness, structure and order, but his genius for solving crimes means he is constantly having to get his hands dirty, helping the police to crack their most difficult cases.
Add to Wish List

Jasper Tempest is a Professor of Criminology at Cambridge University. He is obsessed with cleanliness, structure and order, but his genius for solving crimes means he is constantly having to get his hands dirty, helping the police to crack their most difficult cases.

Every aspect of Professor Jasper Tempest's life is precisely calibrated and rigidly structured. Impeccably dressed and meticulously punctual, he lectures daily at the Cambridge Institute of Criminology, teaching students imaginatively, if pedantically, about the science of crime. And each evening, he returns home to his apartment, which is as sterile and systematically ordered as a science lab. Thanks to this strictly regimented approach, his OCD and germaphobia are under control.

But Professor T's buttoned-down world is slowly undone when he is persuaded by one of his former students, Detective Sergeant Lisa Donckers, to assist her in investigating a serial rapist. The Professor's encyclopedic knowledge of criminal psychology and his brilliant mind prove invaluable to the team, but the cracks in his carefully constructed emotionless exterior begin to show.

Working with the police –and the fiery, instinctive Lisa, in particular –drags Professor T far from his comfort zone and even forces him to confront his suppressed feelings for an old flame. He also finds it increasingly difficult to escape the influence of his imperious mother, with whom he shares a harrowing family secret that has cast a long shadow over both their lives.

Episode 1: Anatomy of a Memory
Professor T is persuaded by a former student, now a police detective, to help her investigate a serial rapist. When he discovers his mother, Adelaide, is trying to sell his long-abandoned family home, T makes a momentous decision.

Episode 2: A Fish Called Walter
When a librarian is poisoned at a cocktail reception at the Museum, Professor T is called upon to help narrow down the list of possible suspects. Not everyone on the police team is happy with Professor T's involvement in the investigation.

Episode 3: Tiger Tiger
Professor T becomes embroiled in a hostage situation, but his unconventional negotiating tactics do not go over well with the police. His old flame, Detective Chief Inspector Christina Brand, reveals all is not well with her marriage.

Episode 4: Mother Love
Professor T is called upon to help investigate the disappearance of a six-year-old girl. Tensions rise between DI Paul Rabbit and Professor T, until they finally come to blows.

Episode 5: Sophie Knows
Professor T befriends a vulnerable girl and is convinced she is the key witness to a murder. Dan and Lisa agree to go on a date but when her boss confronts her about their inappropriate relationship, Lisa makes a bold decision.

Episode 6: The Dutiful Child
When an attempt is made on a billionaire businessman's life, Professor T suspects the culprit may be much closer to home than the police suspect. It's Professor T's birthday and with it comes a haunting childhood memory.

5 star rating 3 Reviews
3 Reviews
J
James T.
Verified Reviewer
5.0 star rating
08/18/22
Professor T
Review by James T. on 08/18/22 review stating Professor T
Fantastic!!!!!!!!! I have watched episode 4 several times this week and keep finding snipets I missed in previous viewing. I am looking forward to purchasing the 1st Season. Profwaaor T is beautiffly cast with Ben Miller in the lead role.
Professor T DVD
J
James T.
Verified Reviewer
5.0 star rating
08/18/22
Proffesor T
Review by James T. on 08/18/22 review stating Proffesor T
My wife and I have seen all six episodes of Season 1. We are hoping for a Season 2 with all of the cast returning. We were so impressed with Season 1, we have recently purchased the DVD for our collection. My only regret is the scoring is limited to five stars. If it was available, I would rate this series with a additional stars or at least pluses. BRAVO to PBS for programming this series!!!
Professor T DVD
L
Linda T.
Verified Reviewer
5.0 star rating
08/18/22
Love it!
Review by Linda T. on 08/18/22 review stating Love it!
This has been fun to watch and I love Ben Millers complex character.
Professor T DVD
Copyright © 2023 Public Broadcasting Service (PBS). All rights reserved.   PBS.org   PBS Mission   Privacy & Security   1-800-531-4727 1-833-565-0293