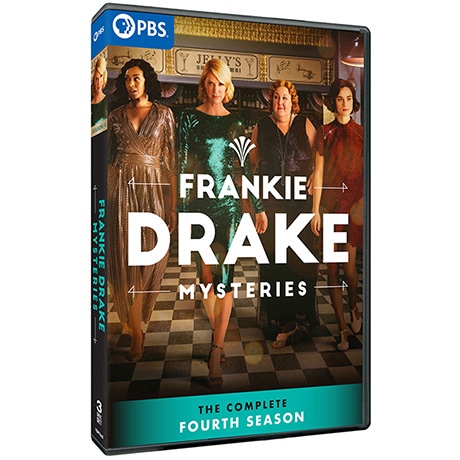 From the wilderness to the world of high society, from an underground cabaret to a candy factory, Frankie and Trudy investigate murders, kidnappings, heists and poisonings. Using her position as a morality officer, Mary is able to snoop through police files and be privy to non-civilian discussions, while Flo lends a hand with autopsy reports, science experiments, and her newly acquired medical skills.

As always, amid high-stakes danger, excitement, intrigue and friendship, the women find their balance in their lives outside of work. Frankie has a European race car-driving beau; Trudy's dreams of home-sweet-home are closer than ever; Mary falls for the wrong fella; and Flo starts a family.

Episode 1: Scavenger Hunt
Our gals are on a spirited scavenger hunt. When a player is murdered, they need to figure out if it's a case of killing off the competition, or something more personal.

Episode 2: Prince in Exile
When a playboy prince is kidnapped, the team has to be discreet as they investigate in order to avoid an international incident.

Episode 3: The Girls Can't Help It
Frankie and Trudy cross paths with a trio of flappers and head into an illegal auction as they investigate the theft of a priceless bottle of wine.

Episode 4: A Most Foiled Assault
When the coach of Canada's first female fencing team is murdered and a fencer is wrongly arrested, Frankie and Trudy are tasked with the case.

Episode 5: Ghost in the Machine
Convinced she was visited by the ghost of a murdered woman; Nora makes Frankie and Trudy search their building leading to a shocking discovery.

Episode 6: The Guilty Party
A man acquitted of a grisly murder is still a suspect. The clock ticks as the team investigate whether or not he is the guilty party.

Episode 7: Life is a Cabaret
After witnessing a man's murder, Frankie's search for his lady-friend suspect leads her to an underground cabaret and surprising results.

Episode 8: Sweet Justice
When Trudy discovers that her new dream home has contaminated water, the gals investigate the source with help from nighttime vigilante, Lady Justice.

Episode 10: A Family Affair
A shakeup in all our gals' lives sees Frankie's dad alive but in danger, Trudy leaving Drake Private Detectives, Mary going on the record, and Flo's new family being threatened.