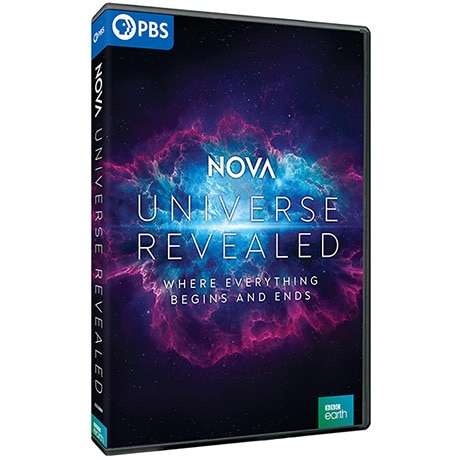 $29.99 $24.99
6 Reviews Write a Review
Item #: WD9212DV
In distant realms far beyond our familiar solar system, an epic drama is playing out, with a cast list featuring rogue planets, colliding galaxies, and black holes more massive than a billion suns, and each character has its own extraordinary story to tell.
Add to Wish List

In distant realms far beyond our familiar solar system, an epic drama is playing out, with a cast list featuring rogue planets, colliding galaxies, and black holes more massive than a billion suns, and each character has its own extraordinary story to tell.

In this five-part series, NOVA delves into the vastness of space to capture moments of high drama when the universe changed forever. State-of-the-art animation delivers astonishing, photorealistic glimpses of the birth of the very first star, the chaos created as two galaxies collide, and the power of a supermassive black hole as it flings a star across space at a million miles an hour. NOVA even takes viewers back on the ultimate time travel voyage to witness the birth of space and time itself. Informed by huge advances in scientific understanding, the series brings us face-to-face with the most surprising characters in the cosmos and reveals how their fates are intertwined with our own. Take a ringside seat for the greatest show in the universe!

4.3 star rating 6 Reviews
6 Reviews
B
Bill K.
Verified Reviewer
5.0 star rating
08/08/22
Fabulous
Review by Bill K. on 08/08/22 review stating Fabulous
This is a great series starring many young and up and coming scientists mixed with some better we'll known ones as well. Great graphics, easy to understand. Great series
NOVA Universe Revealed DVD
I
Iman D.
Verified Reviewer
5.0 star rating
05/11/22
Visually Stunning Presentation
Review by Iman D. on 05/11/22 review stating Visually Stunning Presentation
Educational film gives the viewer, whether a child or adult a lesson on the beauty, creation of the earth and beyond. It will pique the curiosity of someone naturally drawn to science. How magnificent and intricately designed is our existence.
NOVA Universe Revealed DVD
N
Natalie T.
Verified Reviewer
5.0 star rating
05/11/22
Beautifully done, with outstanding visuals and clearly written explanations.
Review by Natalie T. on 05/11/22 review stating Beautifully done, with outstanding visuals and clearly written explanations.
Perfect entertainment for all but the very young. Younger children will not intellectually grasp any of this production, but those maybe 10-12 years will get some of it. Teens and older will be able to get the most from it, because they will probably by this time have experienced some Cosmology education either from formal science education or television programming like those on PBS. Let us not forget about the young amateur astronomers in the family. There is good stuff here, current stuff, the kind dreams are made of for those young folks really interested in these areas of science. It is exciting for them to watch and still more exciting for parents to watch with them. Enjoy!
NOVA Universe Revealed DVD
R
R H.
Verified Reviewer
3.0 star rating
05/11/22
The Graphics are Wonderful, but Much the Commentary is Dissappointing to Me...
Review by R H. on 05/11/22 review stating The Graphics are Wonderful, but Much the Commentary is Dissappointing to Me...
I found the efforts put into the new graphics excellent. However, too much of the expert commentary is wasted on one-liners and statements that are so basic theyve become common knowledge. Information given on the big bang was lacking and even misleading at times. For example, it failed to discuss the important subject of the size of the physical universe and how its expansion, among other things, can have a direct bearing this -- very important! There was absolutely no mention of the James Webb Space Telescope and answers it will help provide about all of the topics this Nova series focuses on. I did find the black hole coverage well done, but only after making it through a painfully slow start.
NOVA Universe Revealed DVD
A
Andrew K.
Anonymous User
5.0 star rating
05/11/22
Review of NOVA Universe Revealed Series
Review by Andrew K. on 05/11/22 review stating Review of NOVA Universe Revealed Series
Excellent documentary. Highly recommended. But a little less entertaining than the Brian Cox original series Universe on the BBC. The NOVA program was distilled from that program.
NOVA Universe Revealed DVD
J
James K.
Verified Reviewer
3.0 star rating
05/11/22
Beautiful visuals and presentation; Overly dramatic narration.
Review by James K. on 05/11/22 review stating Beautiful visuals and presentation; Overly dramatic narration.
I've been watching this new PBS NOVA show on broadcast television, episode by episode. I was very much looking forward to it. And had planned to purchase the series. But... the narration makes it near-unwatchable. The good: The visuals are brilliant and the information is engaging and new. The very bad: The narrator hits word emphasis at awkward points; infuses unneceary verbal drama into the script. (Hint: It's science; not theatre. The script does not need to be dramatically infused.) I don't like to go on about this, but I was truly looking forward to this PBS NOVA series and now I'm so disappointed. The bottom line: One feels as though one is being talked to as though one were a fourth grader.
NOVA Universe Revealed DVD
Copyright © 2023 Public Broadcasting Service (PBS). All rights reserved.   PBS.org   PBS Mission   Privacy & Security   1-800-531-4727 1-833-565-0293