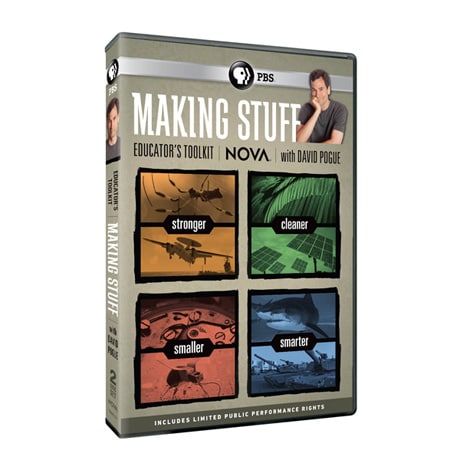 No Reviews Write the First Review
Item #: WED092AV
Our world is poised on the edge of a revolution in the science of materials. From carbon nanotubes to spider silk, sticky gecko feet to bulletproof foam, scientists are combining high-technology with nature's   END_OF_DOCUMENT_TOKEN_TO_BE_REPLACED
Add to Wish List

The Count of Monte Cristo (Paperback)

FRONTLINE: The Fish on my Plate DVD

Our world is poised on the edge of a revolution in the science of materials. From carbon nanotubes to spider silk, sticky gecko feet to bulletproof foam, scientists are combining high-technology with nature's most incredible inventions to create a new generation of materials which are stronger, smaller, cleaner, and smarter than anything we've seen before. Hosted by the New York Times' lively technology correspondent David Pogue, each hour in this four-part series explores the talent, luck, and determination that can turn a wild idea into a cutting-edge material or high-tech breakthrough.

From the deck of a Navy aircraft carrier to the driver's seat in a demolition derby, the MAKING STUFF Educator's Edition showcases materials pushed to the extreme and provides tools that give students an inside look at advances in tensile strength, bioplastic, shrinking microchips, and more. Bring NOVA into the classroom and explore how atoms themselves can be manipulated - changing the future of medicine, computers, energy, and other "stuff" that makes this material world turn.

Episodes include
Making Stuff: Stronger - What is the strongest material in the world? Is it iron? Are Kevlar and carbon nanotubes the way of the future, or will the powerful properties discovered in natural spider silk one day replace steel?

Making Stuff: Smaller - How small can we go? Could we one day have robots taking "fantastic voyages" in our bodies to kill rogue cells? The triumphs of tiny are seen all around us in the Information Age: transistors, microchips, laptops, cell phones.

Making Stuff: Smarter - What can nature teach us in building smarter materials? Can we create materials that sense and respond? "When describing 'smart materials,' one analogy scientists give is the evolution from the first Terminator robot, a machine made of metal and circuitry, to the shape-shifting 'liquid guy' in Terminator 2," said Making Stuff producer Chris Schmidt

Making Stuff: Cleaner - Most modern materials are dangerous to the environment, but what about cleaning up our world? Batteries grown from viruses, tires made from orange peel oil, plastics made of sugar, and solar cells that cook up hydrogen - these are just a few glimpses of a new generation of clean materials that could power devices of the future

Crank: Darkness On The Edge Of Town DVD

FRONTLINE: The Merchants of Cool DVD