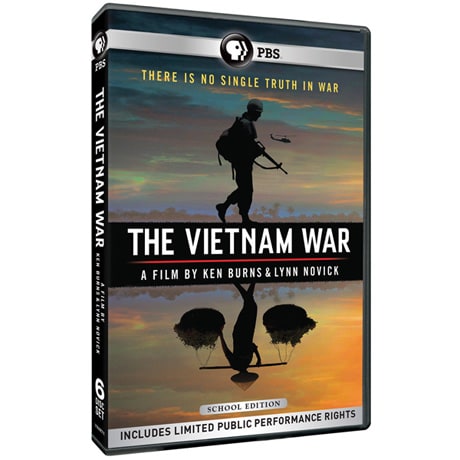 No Reviews Write the First Review
Item #: WED262
Complete series adapted for classroom use, plus discussion guide with correlated clips. Includes PPR. This immersive 10-part series tells the epic story of one of the most divisive, consequential and misunderstood events in American history.
Add to Wish List

All Things Bright and Beautiful (Paperback)

Complete series adapted for classroom use, plus discussion guide with correlated clips. Includes PPR. This immersive 10-part series tells the epic story of one of the most divisive, consequential and misunderstood events in American history.

The Vietnam War: A Film by Ken Burns and Lynn Novick

The complete series adapted for profanity and nudity for classroom use, plus discussion guide with correlated clips. Includes limited public performance rights.

This special version just for educators features the complete 10-part, 18-hour series, edited for profanity and nudity. The set also includes a selection of video clips correlated to a discussion guide that support classroom instruction on the history and legacy of the Vietnam War. The materials examine key military, political, and cultural events as well as the diverse human experiences featured in the film.

THE VIETNAM WAR tells the epic story of one of the most consequential, divisive, and controversial events in American history. Visceral and immersive, it explores the human dimensions of the war through revelatory testimony of witnesses from all sides - Americans who fought in the war and others who opposed it, as well as combatants and civilians from North and South Vietnam. The series includes rarely seen, digitally re-mastered archival footage from sources around the globe, photographs taken by some of the most celebrated photojournalists of the 20th century, historic television broadcasts, evocative home movies, and secret audio recordings from inside the Kennedy, Johnson, and Nixon administrations. THE VIETNAM WAR features iconic musical recordings from the greatest artists of the era, and haunting original music from Trent Reznor and Atticus Ross as well as the Silk Road Ensemble featuring Yo-Yo Ma.

"4 out of 4 stars ""The Vietnam War is an exceptional work, a magisterial series about a conflict that -- after nearly half a century -- still casts a long shadow over American foreign policy...Highly recommended. Editor's Choice." - Video Librarian

"This series - created by Burns and Lynn Novick - immediately feels different, thanks to all the video footage from the war." - Huffington Post

"At this point, Ken Burns is the undisputed master of documentaries, and his take on The Vietnam War - which isn't as far from people's memories as you might think - is searing, moving, and intense." - Albany Times Union

"It stands as one of Burns' finest achievements, in the class of 'The Civil War''and 'Baseball.' " - LA Times

"An immersive portrait of a century of conflicts in Vietnam and the decision-making behind them, featuring accounts from American and Vietnamese witnesses and you-are-there archival images." - Movies.com

"I feel that this is an important series for everyone to watch regardless if you are curious or not. Learning of the horrors of war gives you an understanding and an appreciation to those that fought." - Kids First

"Everyone can learn something from this film: those too young to remember, those who lived through the era and (especially) anyone who thinks The Greatest Generation" has cornered the market on bravery and patriotism. - Military.com

H Is for Hawk (Paperback)