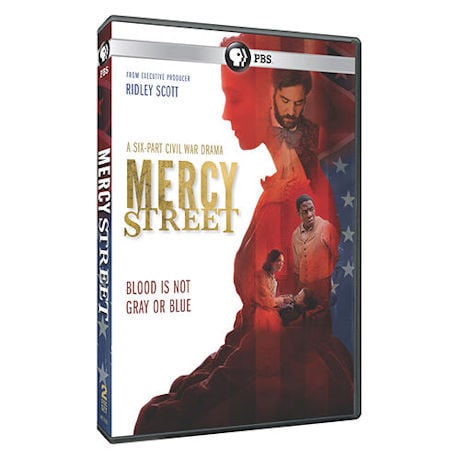 No Reviews Write the First Review
Item #: XA2482
PBS's first American drama in more than a decade follows the lives of two nurses on opposite sides of the Civil War. Mary Phinney (Mary Elizabeth Winstead) is a New England abolitionist, Emma Green (Hannah James) is a Confederate supporter in a story set in the Mansion House Hospital in Alexandria, Virginia. The creative team includes Ridley Scott (The Good END_OF_DOCUMENT_TOKEN_TO_BE_REPLACED
Add to Wish List

Alexandria, Virginia, 1862. Mary Phinney, a staunch New England abolitionist, and Emma Green, a naïve Confederate belle, collide at Mansion House, the Green family's luxury hotel that has been transformed into a Union Army hospital. Ruled under martial law, the border town of Alexandria is now the melting pot of the region, filled with soldiers, civilians, female volunteers, doctors, wounded men from both sides, runaway slaves, prostitutes, speculators, and spies.

From executive producer Ridley Scott, Mercy Street goes beyond the battlefield and into the lives of Americans on the Civil War homefront as they face the unprecedented challenges of one of the most turbulent times in our nation's history.

"The show does the Downton thing well, focusing on multiple overlapping story lines, different groups of characters, and featuring sharp writing and a top-notch cast" - I Want My Two Dollars

"This series is not about battles and glory, it's about the drama and unexpected humor of everyday life behind the front lines. It's a fresh twist on an iconic story, one that resonates with larger themes we still struggle with today." - High Def Degest

3.5 out of 4 stars
"Mercy Street is an historical American medical drama that takes its cues from British period pieces…Highly recommended." - Video Librarian