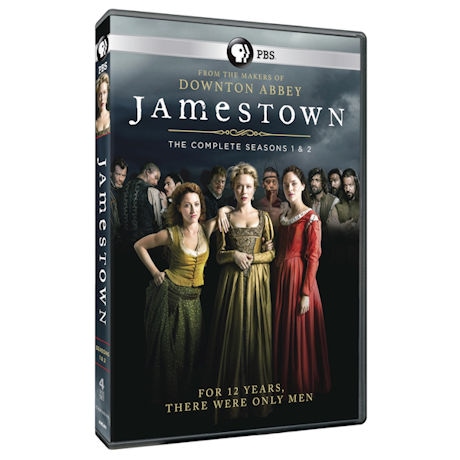 No Reviews Write the First Review
Item #: XC6442DV
1619. The British colony of Jamestown, Virginia is shaken up when the first women in 12 years land in this breathtaking wilderness. While love triangles, bitter rivalries, and fierce competition cause conflict for the residents and the native inhabitants, the Pamunkey, they are bound together by their resolute will to survive and thrive in their new lives.
Add to Wish List

1619. The British colony of Jamestown, Virginia is shaken up when the first women in 12 years land in this breathtaking wilderness. While love triangles, bitter rivalries, and fierce competition cause conflict for the residents and the native inhabitants, the Pamunkey, they are bound together by their resolute will to survive and thrive in their new lives.

Jamestown 1619. On what feels like the edge of the world sits the British colony of Jamestown, Virginia. For 12 years, it has been populated only by men, but the settlement is shaken up when the first women, including Alice (Sophie Rundle), Verity (Niamh Walsh), and Jocelyn (Naomi Battrick), land in this breathtaking wilderness.

The settlement is on the brink of change summoned by the arrival of a new governor, Yeardley (Jason Flemyng), who brings a charter granting land to the earliest settlers in reward for their loyalty. These new laws cause power struggles not only within the town, but also with the native inhabitants, the Pamunkey, led by the influential Opechancanough (Raoul Trujillo). Always measured and respectful, he seeks ways to match the English like for like, while retaining honor for his people and their way of life.

While love triangles, bitter rivalries, and fierce competition cause conflict for the residents, ultimately they are bound together by their resolute will to survive and thrive in their new lives.

EPISODE 1
1619. A new governor arrives in Virginia bearing revolutionary plans for the colony. With him arrive a group of women, destined to marry the beleaguered men of Jamestown. Among them are the sophisticated courtier Jocelyn Woodbryg, farm girl Alice Kett and streetwise Verity Bridges. Faced with a hazardous wilderness and physical hardship, they see the prospect of freedom and adventure. UK Edition.

EPISODE 2
Farlow and Redwick’s disdain for the women intensifies and they attempt to send them a powerful message. When a mysterious illness spreads, they see an opportunity to exploit it and accusations of witchcraft are levied at the outspoken Verity. Jocelyn must use her guile to help her friend. Alice faces her own battle as the authorities attempt to dictate who she should marry. UK Edition.

EPISODE 3
Pamunkey warriors descend upon the colony and the settlers meet with powerful tribal leader Opechancanough. When Massinger tries to cause trouble for Silas, Alice unearths a damning secret from the plantation owner’s past. UK Edition.

EPISODE 4
Rumor of a goldmine map sends suspicion around the settlement. Farlow and Redwick resort to espionage to get the better of Jocelyn and when James Read’s temper leads him into serious trouble, he finds himself indebted to Alice. Jocelyn finally learns who possesses the map and Henry and Davie decide to head towards the mountains in pursuit of the gold. UK Edition.

EPISODE 5
Governor Yeardley falls ill and Farlow is quick to seize power but Redwick sees an opportunity to turn the unruly militia against the governing elite and cause civil unrest. An accusation by Alice spurs James into finding out what really happened to Henry, while Jocelyn realizes she underestimated Temperance. UK Edition.

EPISODE 6
Disillusioned with the leaders of the settlement, Verity succumbs to the bad habits for which she was jailed back in England. The Sharrows’ crop comes under a potentially devastating threat. And as the settlers mark the harvest, an arrival in town disrupts the celebrations. UK Edition.

EPISODE 7
Henry presents his newfound riches to the townsfolk and soon acquires himself an array of eager friends. His return pushes Alice to take matters into her own hands, and a scientific discovery alters the hopes of all within Jamestown. UK Edition.

EPISODE 8
A boat from England arrives, and Temperance gets a letter that Jocelyn fears will contain details of her scandalous past. Meanwhile, Yeardley receives instructions from England heralding a political change that will affect everyone. Redwick strikes a covert and divisive business deal. As the farmers celebrate summer harvest, a new and deplorable chapter in the town’s history begins. UK Edition.

Season 2, Episode 1
The birth of Alice’s child brings some much needed joy to Jamestown but she faces a challenge which proves how politically significant her son is to the whole settlement. The discovery of a terrible crime throws suspicion upon all inhabitants, and when Jocelyn’s position in the colony comes under threat, she forges a surprising new connection. UK Edition.

Season 2, Episode 2
The Rutters embark on a money-making adventure which has brutal consequences. Pedro has a plan for advancement but it requires Jocelyn’s help. The Sharrows look for a way out of a compromising situation which Alice accidentally makes much worse. UK Edition.

Season 2, Episode 3
A challenge from the Pamunkey leads to heartache for the Sharrows and tests Yeardley’s ability to defuse the conflict. Maria’s behavior comes under scrutiny by Temperance, while Christopher joins in the town’s political games to impress Jocelyn. UK Edition.

Season 2, Episode 5
Secretary Farlow returns with an intriguing alchemist in tow, which leads to an unusual revelation. The Sharrows await their first tobacco profits from overseas, while Maria and Pedro seek help from the Rutters when they’re framed for a crime. UK Edition.

Season 2, Episode 6
Yeardley reveals that the colony faces a new and potentially devastating threat, while Massinger finds himself in a vulnerable position. An eclipse darkens the sky and ghostly happenings finally reveal the Catholic spy and Samuel’s true murderer. UK Edition.

Season 2, Episode 7
When Maria’s trust is betrayed, she runs away into the wilderness and leaves a life hanging in the balance. Silas and Henry make a business deal which compromises their principles, while Jocelyn forms a pact with a most unlikely ally. UK Edition.

Season 2, Episode 8
Jocelyn uses secret intelligence to claim a stronghold in the town, but Yeardley forms an audacious plan that will change life in Jamestown forever. Silas’ collusion with the Pamunkey comes to a head, as Jocelyn learns what it means to lose everything. UK Edition.