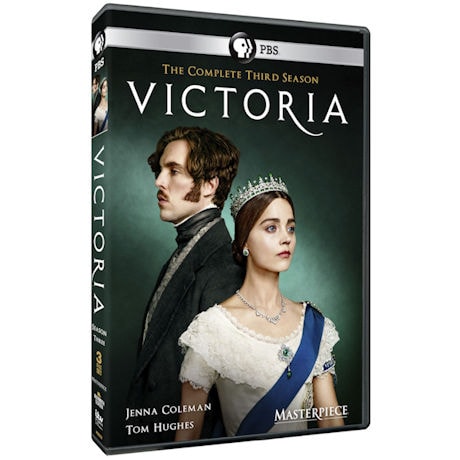 $49.99 $39.99
3 Reviews Write a Review
Item #: XC7102
Created and written by Daisy Goodwin, Victoria is a landmark account of the life of one of history's greatest monarchs. With an ensemble cast of award-winning talent, Victoria draws on real-life events and the Queen's own exhaustive diaries to paint a vivid portrait of her transformation from an impulsive 18-year-old to her early years as wife, mother, and head of END_OF_DOCUMENT_TOKEN_TO_BE_REPLACED
Add to Wish List

Created and written by Daisy Goodwin, Victoria is a landmark account of the life of one of history's greatest monarchs. With an ensemble cast of award-winning talent, Victoria draws on real-life events and the Queen's own exhaustive diaries to paint a vivid portrait of her transformation from an impulsive 18-year-old to her early years as wife, mother, and head of a global empire.

Masterpiece: Victoria Acclaimed drama Victoria returns for a third season as revolution sweeps across Europe, and Queen Victoria (Jenna Coleman, Doctor Who) must scrutinize her relationship with her public, while Prince Albert (Tom Hughes, The Game) is filled with visionary plans for social change. The love between Victoria and the Prince is tested like never before. How far can their marriage withstand the pressures of constitutional crises, scandals at court, and the birth of ever more children?

Allegiances are stretched by the incendiary Foreign Secretary (Laurence Fox, Inspector Lewis) and the unexpected arrival of Victoria’s half-sister, Feodora (Kate Fleetwood, Harlots). After ten years on the throne, life as a mother, wife, and Queen has never been more demanding.

Season 3, Episode 1 Uneasy Lies the Head that Wears the Crown
Revolution sweeps across Europe and reaches Britain, bringing the unexpected arrival of Victoria's half-sister Feodora and the deposed King of France. The Chartist movement threatens the monarchy, and Victoria must confront the fact that her people may wish to end her reign, and grapple with Lord Palmerston, the incendiary Foreign Secretary, and Lord John Russell, the hapless Prime Minister.

Season 3, Episode 2 London Bridge Is Falling Down
After the birth of Princess Louise, Victoria is too weak to travel to Osborne House. When it appears that the Chartists have become violent, Victoria must order troops to protect herself. Louis Philippe upsets Albert, and Feodora clashes with her sister. Victoria allows the Chartists to present their petition and the family travels to Osborne, Albert’s great creation on the Isle of Wight.

Season 3, Episode 3 Et in Arcadia
At Osborne House, Victoria and Albert have the opportunity to educate their children away from the turmoil of London. But Victoria is frustrated to be so far from her public, and summons Palmerston and Russell to join the royal party when Palmerston’s conduct proves ever more provocative. Nocturnal liaisons send ripples through the court.

Season 3, Episode 4 Foreign Bodies
The royal couple are estranged when Albert runs for the Chancellorship of Cambridge University, leaving Victoria in London to confront a spiraling cholera crisis. On the streets, an eccentric young visionary, Dr. Snow, strives to solve the mystery of the disease. When cholera reaches Skerrett and Francatelli’s new business, Victoria and Albert are compelled to put their differences behind them.

Season 3, Episode 5 A Show of Unity
After an assassination attempt, the Royal household visits Ireland, hosted by Lady Palmerston. Victoria is heartened by her reception, but Albert sees only division. Sophie and Joseph’s romance blossoms, while Victoria and Albert are in turns intrigued and appalled at the unconventional arrangement of the Palmerston marriage. Feodora is left to her own devices in the Palace.

Season 3, Episode 6 A Coburg Quartet
A Georgian ball is planned to celebrate the christening of Prince Arthur. When private etchings of the Royal family are made public, Victoria, Albert and Leopold are horrified. There are fears that Bertie has inherited the madness of King George. Albert fears Victoria is not of sound mind, and reveals he no longer loves her like he once did.

Season 3, Episode 7 A Public Inconvenience
Victoria and Albert have never been further apart. Albert unveils his plans for an international exhibition on a huge scale. Palmerston causes uproar when he sends the navy in to blockade Greece. Palmerston and Albert’s popularity plummets, but Palmerston wins back his support in parliament. Victoria determines to win back Albert’s affection even if it means reconciling with Feodora.

Season 3, Episode 8 The White Elephant
The whole world is watching as the Great Exhibition is opened to the public, and Albert and Victoria are determined to make it a success. Palmerston suffers a setback as he misreads a political situation. Feodora is foiled in her plans to marry her daughter to Louis Napoleon, and her true nature is revealed to Albert.

SEASON 3 - Trailer
Take a sneak peek at the third season of this landmark drama starring Jenna Coleman and Tom Hughes. As revolution breaks out across Europe, Britain’s monarch Queen Victoria faces a crisis that threatens to end her reign.

"Every month, subscription streaming services add a new batch of titles to their libraries. Here are the ones we think are most interesting for September." - NY Times online