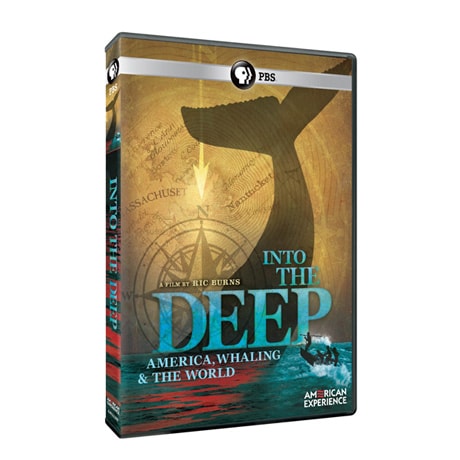 No Reviews Write the First Review
Item #: WA7542
For two centuries, American whale oil lit the world - illuminating and powering the start of the industrial revolution, and laying the groundwork for a truly global economy. This two-hour film will tell the riveting and extraordinary story of the American whaling industry, from its origins off the coast of New England and Cape Cod, through the great golden age END_OF_DOCUMENT_TOKEN_TO_BE_REPLACED
Add to Wish List

For two centuries, American whale oil lit the world - illuminating and powering the start of the industrial revolution, and laying the groundwork for a truly global economy. This two-hour film will tell the riveting and extraordinary story of the American whaling industry, from its origins off the coast of New England and Cape Cod, through the great golden age of deep-ocean whaling, to the industry's spectacular demise.

INTO THE DEEP: AMERICA, WHALING, & THE WORLD, from filmmaker Ric Burns, tells the thrilling and epic story of three centuries of American whaling, and the unique relationship between American whalers and the giant creatures they hunted. The hunt for these mysterious, mammoth beings helped fueled the expansion of the American economy - propelled tiny backwater ports like Nantucket and New Bedford to the unrivalled center of the whaling world - and pioneered the first truly global enterprise America ever knew. At the height of the whaling industry, U.S. whale ships encircled the globe, a massive state-of-the-art fleet crewed by highly-skilled mariners whose ever-widening search for whales enabled them to chart the seven seas. The magnificent creatures were slaughtered for the precious oil that filled their massive heads, the high-quality illuminant that lit the drawing rooms of Europe and greased the wheels of the Industrial Revolution.

Few aspects of the American experience have struck more deeply into the imagination of the American people - or resonated more profoundly with deepest American hopes, fears and dreams - than the savagely primal, unfathomably limit-testing experience of whaling. Says Ric Burns, "the epic story of whaling is intimately bound up with the story of America, in strange and telling ways: as a riveting case study in maritime culture at its most extreme - as a dark and shining parable of American capitalism on the rise - and as an allegory for the American, and the human experience - long before a restless sometime whaleman and would-be writer named Herman Melville ever went to sea."

Deleted scenes that take a closer look at whales, the history of Nantucket, and the whaling industry:
The Forecastle - Experts Margaret Creighton and Stuart Frank consider the reasons why men were drawn to employment on whaleships, and describe how they occupied themselves during long stretches of inactivity.

Sperm Whales & Scrimshaw - About how whalers would use sperm whale bones to carve images and create scrimshaw.

Nantucket - Expert Nat Philbrick narrates the arc of the island's history, beginning with the founding families and ending with the collapse of the whaling industry in the 1850s, and making mention along the way of the island's connections to the Gold Rush, Folgers Coffee, and Macy's.

Whales - Experts Daniel Vickers, Nat Philbrick and Eric Jay Dolin consider just what it is about whales that make them so compelling to human beings.

Wings of Gull - Mystic Seaport reenactors gather around vocalist Rick Spencer in the cramped forecastle of the Charles W. Morgan as he delivers an a cappella performance of the whaling shanty ""Wings of a Gull."" This song and scene have a somber feel.

Bonnie Ship the Diamond - Mystic seaport reenactor and musical performer David Littlefield delivers a rousing performance of the whaling shanty "Bonnie Ship the Diamond," with banjo and violin accompaniment. As above, David is among the Mystic reenactors in the crowded and smoky forecastle of the Charles W. Morgan.

Coast of Peru - Mystic Seaport reenactor and musical performer David Littlefield sings the whaling shanty "Coast of Peru," a cappella, on the deck of the Charles W. Morgan.

A Very Long Take - A long camera shot done from a helicopter circling the Essex ship.