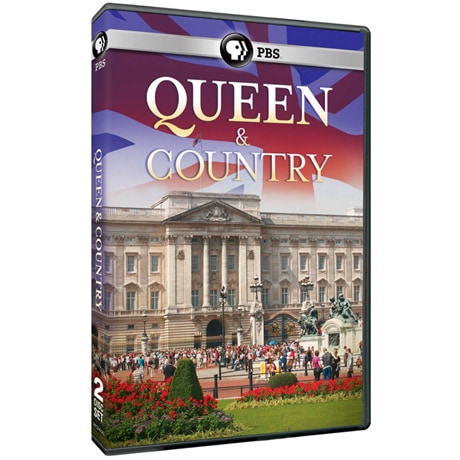 $29.99
2 Reviews Write a Review
Item #: WA8542
This program presented as originally broadcast in the UK. Her 60 years on the throne make her the second longest-serving sovereign in history, and in 2012 all eyes are on Queen Elizabeth II as Britain marks her Diamond Jubilee. In this fascinating series, veteran newsman Sir Trevor McDonald looks not only at the traditions and institutions surrounding the monarchy, but END_OF_DOCUMENT_TOKEN_TO_BE_REPLACED
Add to Wish List

This program presented as originally broadcast in the UK.

Her 60 years on the throne make her the second longest-serving sovereign in history, and in 2012 all eyes are on Queen Elizabeth II as Britain marks her Diamond Jubilee. In this fascinating series, veteran newsman Sir Trevor McDonald looks not only at the traditions and institutions surrounding the monarchy, but at the fabric of British life and history. From Changing the Guard at Buckingham Palace to the collection of Historic Royal Palaces; from a privileged glimpse at the making of a royal portrait to 600 years of counting royal swans on the River Thames; from a potential change to the rules of succession to the pomp and circumstance of a state visit, this is truly a showcase for a queen and her country.

Programs include…
London, Royal City - London is, indisputably, the capital of Britain's royal life. Here, the young Princess Elizabeth grew up before the Second World War. Here, she and her sister, Margaret, mingled, incognito, with the joyous crowds on VE Day. It is still the centre of a working monarchy. Trevor McDonald reports on the tradition of Changing the Guard at Buckingham Palace and visits Horseguards to meet the man who is in charge of the troops who guard The Queen.

Royal Visit - The Queen's year is driven by her diary - and has been since her accession in 1952. We are in Scotland to see her at the Braemar Gathering (she has been to it seventy times); we follow her on a visit to Liverpool - the sort of regional trip that happens every week but attracts little publicity. And, we discover unique 3D footage of a young queen, shot in 1953, which is held by the British Film Institute.

The Queen's Possessions - The Queen has some surprising possessions. Among them are Westminster Abbey and the Chapels Royal. These are 'peculiars of the crown' - as are the Channel Islands where they still call Her Majesty the 'Duke of Normandy' to remind outsiders that they were with William the Conqueror on the winning side at the Battle of Hastings. The Queen also owns the Tower of London - part of a collection of Historic Royal Palaces. Not forgetting the Royal Collection - to which she has added nearly 150 portraits over the past six decades. We follow the process used to create one of the most unusual.

Traveller - The Queen is head of the sixteen realms which make up the Commonwealth. We are in Perth, Western Australia, where The Queen is on tour - before opening the Heads of Government Meeting. It is a meeting which is especially important for the monarchy: the Commonwealth countries are being asked to change the rules of succession so that a first-born girl might inherit the crown. If it's approved, it will be the single biggest change to the monarchy for centuries. At the age of 85, The Queen remains undaunted by long-haul travel - as this programme shows.

5 star rating 2 Reviews
2 Reviews
L
Lr
Anonymous User
5.0 star rating
06/30/22
Worth Watching
Review by Lr on 06/30/22 review stating Worth Watching
I saw this on a PBS station and ordered it for a friend from the UK.
Queen & Country DVD
S
Storyms
Anonymous User
5.0 star rating
06/30/22
Good biographical review
Review by Storyms on 06/30/22 review stating Good biographical review
As a senior citizen, I have watched the Queen growing up, the coronation, the children, the granchildren, and now the great-grandchild. Being a biography buff, I was fascinated by this review of her life and the part she has played in in British society.
Queen & Country DVD
Copyright © 2022 Public Broadcasting Service (PBS). All rights reserved.   PBS.org   PBS Mission   Privacy & Security   1-800-531-4727 1-833-565-0293