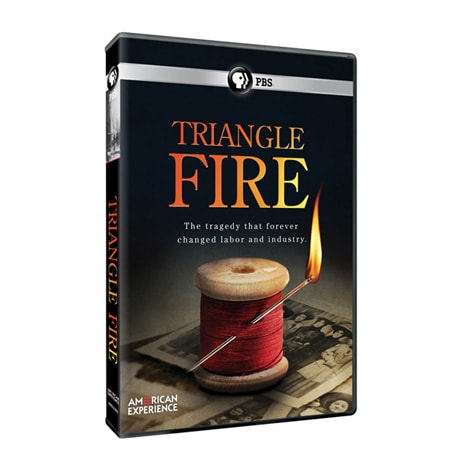 No Reviews Write the First Review
Item #: WB0412
The fire that tore through the Triangle Shirtwaist Factory in New York City on March 25, 1911, was the gruesome culmination of years of unrest in America's most profitable manufacturing industry. Two years   END_OF_DOCUMENT_TOKEN_TO_BE_REPLACED
Add to Wish List

Secrets of the Dead: The Mona Lisa Mystery DVD

Ken Burns: Not for Ourselves Alone: The Story of Elizabeth Cady Stanton & Susan B. Anthony DVD

The fire that tore through the Triangle Shirtwaist Factory in New York City on March 25, 1911, was the gruesome culmination of years of unrest in America's most profitable manufacturing industry. Two years earlier, led by a spontaneous walkout in the same factory, twenty thousand garment workers, in the largest women's strike in American history, took to the streets of New York to protest working conditions. They gained the support of both progressives and leading women in New York's high society. But it took the tragedy at the Triangle Shirtwaist Factory, the death of one hundred and forty-eight young women and the ensuing national outrage, to force government action. From producer Jamila Wignot (Walt Whitman, Jesse James, The Massie Affair) comes Triangle Fire (wt), a one-hour film chronicling the tragedy that shook New York and forever changed the relationship between labor and industry in the United States. And it is a relationship that is still in question today as Americans re-examine the balance between the welfare of citizens and the motivations of global capitalism. Produced by Jamila Wignot.

In Remembrance of Martin DVD

At Home at Highclere: Entertaining at the Real Downton Abbey Book - Unsigned

FRONTLINE: Are We Safer? DVD

The Black Panthers: Vanguard of the Revolution - Institutional Edition DVD