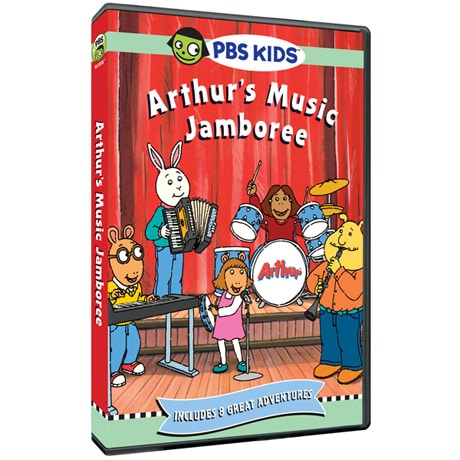 Based on the best-selling children's books by Marc Brown, join the world's most famous aardvark, eight-year-old Arthur Read, and his family and friends on these great adventures!

Arthur Plays the Blues - Although Arthur's beloved piano teacher is retiring, she assures him that the next teacher will be outstanding…and famous, too! Then Arthur meets Dr. Fugue - who's as strict as he is odd - and begins to doubt his own abilities. Will Arthur be fired from playing the piano?

Buster's Sweet Success - When Buster signs up to sell candy for the band, he figures it's easy money - who doesn't love chocolate? Buster soon wishes that somebody loved it more than he does, because he eats it all himself. Will the band be doomed to wear tattered uniforms and play old instruments forever?

My Music Rules - It's the duel of the century as cellist Yo-Yo Ma faces jazz saxophonist Joshua Redman in the toughest gig of their careers…in the Elwood City Library! Whose music will rule after the greats duke it out of the battle of classical versus jazz?

Arthur vs. the Piano - ""Local Boy Wrecks Concert!"" ""Bad, Bad Musician!"" These are the headlines Arthur can all-too-easily imagine after he gets stage fright during a rehearsal. Now he's terrified of playing to another audience. Will he be able to get through his recital without any mistakes? Or should he just move far, far away?

Brother, Can You Spare a Clarinet - The try-outs for the Young Person's Orchestra are coming to Lakewood Elementary and everyone agrees that Binky is a shoe-in, since he's the best musician in school. So why is Binky suddenly refusing to play in band practice? Has Binky turned against his clarinet…or against music itself?