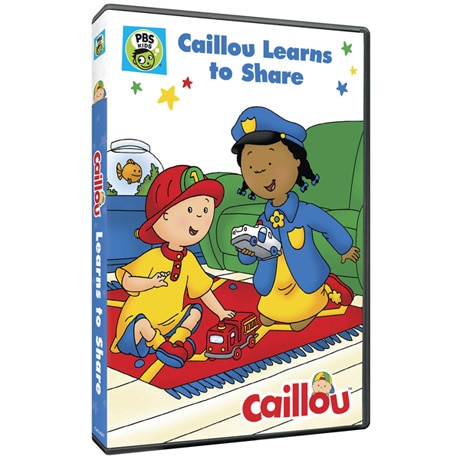 $12.99
1 Review Write a Review
Item #: WB1562
Caillou discovers that sharing his things with the people he loves always turns out better in the end. From teaching his classmate Clementine his special art technique, to taking turns at playing "conductor" with his friends and family, to sharing his favorite things with little sister Rosie, Caillou learns that sharing not only makes him feel really good, it makes END_OF_DOCUMENT_TOKEN_TO_BE_REPLACED
Add to Wish List

Caillou discovers that sharing his things with the people he loves always turns out better in the end. From teaching his classmate Clementine his special art technique, to taking turns at playing "conductor" with his friends and family, to sharing his favorite things with little sister Rosie, Caillou learns that sharing not only makes him feel really good, it makes those around him feel good too!

Episodes include…
That's Mine! - When Rosie accidentally scratches Caillou's bike, Caillou is determined to take back all of his toys and keep their things separate…until he accidentally breaks Daddy's guitar string. Then Caillou realizes accidents happen sometimes. He forgives Rosie and decides to share his toys once again.

Copycat Clementine - Caillou is annoyed! Clementine is being a copycat - and Caillou doesn't like it. When Clementine copies his artwork at preschool, Caillou thinks this is the last straw…until Clementine admits she's copying him because she really likes his artwork! With help from Miss Martin, Caillou realizes this is a compliment and he feels much better about Clementine's copycat ways.

Caillou's Poster - Caillou is excited about the opportunity to draw a poster for his friend Ted, at the grocery store. When Caillou gets his friends to help him with the poster, but doesn't share the credit, Leo is upset. Caillou realizes he needs to make things right again - and he has the perfect solution: he includes his friends in a photo shoot with their collective "masterpiece."

Playhouse Play Date - Caillou and Sarah work together to decorate Caillou's new playhouse. They even plan a playhouse playdate for all of their friends! When the big day arrives - and Sarah has the chicken pox - Caillou decides to go ahead with the party…but soon realizes it isn't the same without Sarah, especially since she contributed so much.

Caillou Conducts - The preschool has a visitor - Liz, a musician. She shows the kids all sorts of instruments and Caillou is excited when he's chosen to be the orchestra's 'conductor.' In fact, he's so excited, he can't stop conducting those around him - at preschool and even at home! When Caillou refuses to share his conductor's baton he soon learns how easy it is to hurt other's feelings - and how it feels better to give others a turn.

Caillou's Song - Caillou wants to learn to play a song on his little keyboard…only Rosie won't leave him alone. She keeps distracting him, trying to chime in with her drum, and pots and pans, and silly singing. When Caillou sees his sister playing on a 'pretend' keyboard - just like Caillou - he decides to let Rosie join in his music fun.

Where's Caillou? - Caillou wants someone to play with, but he doesn't want to play dollies with Rosie…again! In an effort to get away from his pesky little sister, Caillou hides. As Rosie searches around the house for Caillou, her efforts soon turn into a fun game of hide-and-seek…giving both siblings something fun to do!