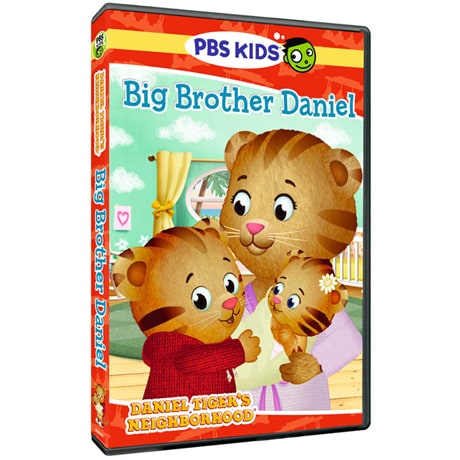 No Reviews Write the First Review
Item #: WB2182
Daniel Tiger's Neighborhood: Big Brother Daniel: Meet the New Baby Four-year-old Daniel Tiger invites young viewers directly into his world, giving them a kid's eye view of his life and making them feel like one of his neighbors. Episodes include… The Tiger Family Grows - The Tiger Family is growing and Daniel learns that he is going to be a END_OF_DOCUMENT_TOKEN_TO_BE_REPLACED
Add to Wish List

Four-year-old Daniel Tiger invites young viewers directly into his world, giving them a kid's eye view of his life and making them feel like one of his neighbors.

Daniel Learns About Being a Big Brother - The new baby is almost here and the Tiger Family is getting ready for their arrival. Daniel is eager to help as Mom and Dad prepare the new baby's room, but struggles with the idea of giving up old baby things for his new sibling. He soon realizes that being a big brother means letting go of things you no longer need, and that's a big help for the whole family.

The Baby is Here (Special Double Episode) - The baby is about to arrive and everyone is so excited! Mom and Dad head to the hospital to have the baby while Daniel and Grandpere spend time at home going through some of Daniels old things. Daniel discovers an old bedtime book that inspires some musical play in the park - as well as big musical numbers throughout the story, welcoming the new addition to the Tiger Family. Baby Margaret comes home!

Time for Daniel - Daniel is playing adventure tiger at home with Dad, but things are not quite the same, now that Baby Margaret is around. Daniel is upset that Dad keeps interrupting their play to take care of Baby Margaret, but Daniel learns that there's time for the baby and time for Daniel, too.

Playtime is Different - Daniel is having fun playing restaurant with O and Katerina but they keep getting interrupted by a very curious Baby Margaret who wants to be part of the action. She also can't seem to keep her hands off of Daniel's beloved Tige-y! Daniel eventually learns that although having a new baby sister around is very different…it can also be really fun.

The Playground is Different with Baby - Daniel is playing ""circus"" at the playground with his friends, but Baby Margaret seems to be making things different. Mom and Dad encourage Daniel to find a way to include Baby Margaret in the play, which Daniel learns can actually be even more fun! Let the circus parade go on!