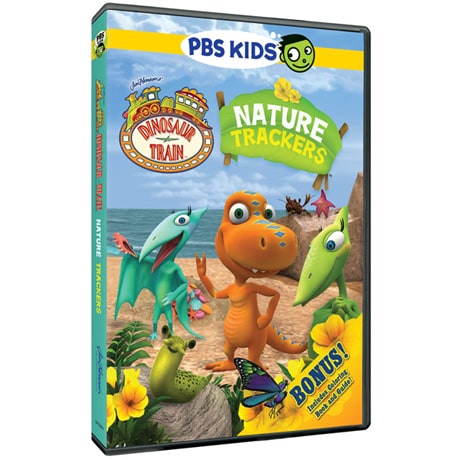 $9.99
2 Reviews Write a Review
Item #: WB2922
Dinosaur Train embraces and celebrates the fascination that preschoolers have with both dinosaurs and trains while sparking an interest in life science, natural history, and paleontology. Dinosaur Train: Nature Trackers includes: Stargazing on the Night Train/Get Into Nature!; Shiny and Snakes/Tiny Loves Flowers; Buddy Explores the Tyrannosaurs/Rainy Day Fight; and That's Not a Dinosaur/Tiny's Garden.
Add to Wish List

Dinosaur Train embraces and celebrates the fascination that preschoolers have with both dinosaurs and trains while sparking an interest in life science, natural history, and paleontology. Dinosaur Train: Nature Trackers includes: Stargazing on the Night Train/Get Into Nature!; Shiny and Snakes/Tiny Loves Flowers; Buddy Explores the Tyrannosaurs/Rainy Day Fight; and That's Not a Dinosaur/Tiny's Garden.

Join Buddy, Tiny, Shiny, and Don as they travel on the Dinosaur Train and learn about the world around them. From stargazing to planting a garden the kids dive into the outdoors and get into nature!

Stargazing on the Night Train - The Pteranodon family rides a special 'Night Train' to another part of the Cretaceous Time Period, where they meet a Troodontid "cousin" of the Conductor's, Sidney Sinovenator, who knows more about the stars than anyone. Sidney takes the family up to his favorite stargazing spot, "Starry Hill."

Get Into Nature! - When the kids build their own version of a nest on the beach, they get the idea to turn their beach nest into a clubhouse. Shiny thinks that a clubhouse needs a club, and "the Nature Trackers" club is born! The kids decide to make their club about getting outside, getting into nature, and making new discoveries. The only problem is: which kid is in charge of the club?

Shiny and Snakes - Shiny gets over her fear of snakes when Tiny challenges the Nature Trackers to meet the ultimate snake: the Sanajeh, a huge Cretaceous snake from what is now India. Dad takes the kids on the Dinosaur Train to find Sana Sanajeh, who may be huge, but turns out to be quite friendly.

Tiny Loves Flowers - Tiny is horrified when her favorite buttercups all wilt, so Mom takes her and the family to the Big Pond, where she remembers seeing a whole lot of buttercups in bloom. On the way there, the Conductor gives the kids a visual lesson in "Nature's Life Cycle," explaining how a flower grows, blossoms, then wilts, and returns its seeds to the ground, to start the cycle all over again.

Buddy Explores the Tyrannosaurs - Buddy, an adopted T. rex, wishes he knew more about his T. rex ancestors. So, Dad takes him and Tiny on the Dinosaur Train back to the early Cretaceous, to visit an ancestor: an earlier version of Tyrannosaurus rex called Raptorex. Rodney Raptorex is a kid who won't grow up to be as big as Buddy will, but the two boys find that they not only have a lot of differences, they have a lot in common, too.

Rainy Day Fight - The kids are stuck cooped up in the nest for a long, rainy spell which leads to them fighting. Mom tells them that the rain has stopped enough that they can leave the nest - but she gives them an assignment: to go find their own "calm space," where they can calm down enough to get along with each other again.

That's Not a Dinosaur - The kids visit the Big Pond to attend the Biome Block Party. While attempting to win the leaf-necklace contest, Keenan Chirostemotes claims the Pteranodon sibs can't compete for the prize for "dinosaur" with the most leaves because they are not dinosaurs. This launches the kids into a song called "That's Not a Dinosaur", as all the non-dinosaurs sing their piece. In the end, the game rules are changed to include all creatures, even non-dinosaurs, in all the contests!

Tiny's Garden - The Nature Trackers go on a visit to the Big Pond, where Tiny hopes to see her favorite flowers. The Conductor tells her that if the kids gather seeds at the pond, they can bring them home and plant a garden full of those same flowers at the family nest! The kids all get into it, gathering seeds and bringing them home, where they plant a garden, and meet its new inhabitants, including Sammy, a friendly slug, who explains that slugs, spiders, and butterflies all help to make a garden complete.