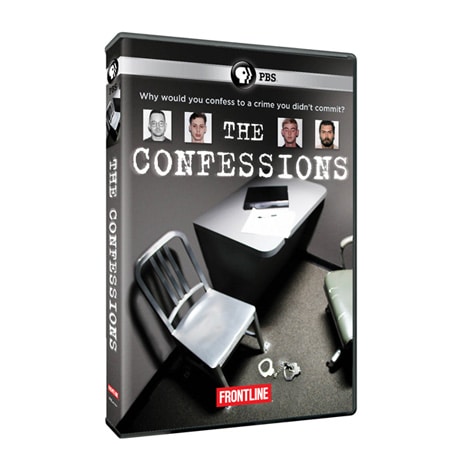 $24.99
3 Reviews Write a Review
Item #: WB4782
Why would four innocent men confess to a brutal crime they didn't commit? FRONTLINE producer Ofra Bikel (Innocence Lost, An Ordinary Crime) investigates the conviction of four Navy sailors for the rape and murder of a Norfolk, Virginia, woman in 1997. In interviews with the sailors, Bikel learns of some of the high-pressure police interrogation techniques, including the threat of END_OF_DOCUMENT_TOKEN_TO_BE_REPLACED
No Longer Available

Why would four innocent men confess to a brutal crime they didn't commit? FRONTLINE producer Ofra Bikel (Innocence Lost, An Ordinary Crime) investigates the conviction of four Navy sailors for the rape and murder of a Norfolk, Virginia, woman in 1997. In interviews with the sailors, Bikel learns of some of the high-pressure police interrogation techniques, including the threat of the death penalty, sleep deprivation, and intimidation, that led each of the ""Norfolk Four"" to confess, despite any evidence linking them to the crime. All four sailors are now out of prison - one served his sentence and the other three were granted conditional pardons last summer - but the men were not exonerated as felons or sex offenders. The case raises disturbing questions about the actions of the police and prosecutors, who relied on the sailors' often contradictory confessions for their convictions, and disregarded DNA evidence that pointed to a lone assailant who would later confess to the crime himself while serving prison time for another rape.

The DVD features Descriptive Video for the Visually Impaired

5 star rating 3 Reviews
3 Reviews
B
Billy
Anonymous User
5.0 star rating
07/17/20
Frontline: Confessions Of 4 Innocent men
Review by Billy on 07/17/20 review stating Frontline: Confessions Of 4 Innocent men
Excellent film.
FRONTLINE: The Confessions DVD
D
Don Q.
Anonymous User
5.0 star rating
07/17/20
My Soul Grieves
Review by Don Q. on 07/17/20 review stating My Soul Grieves
When law becomes business and political there ends justice. When prosecutors seem to meet all reason will stalwart pride in the face of almost obvious wrongs and avoidance of truth for reputations sake, we should fear law as practiced in our society today. This story leaves many questions as to the details of events, but does evoke a sense of how this could happen to you. Confessions are as eye witness testimony in that if you do not have the history of events which lead up to them, you can not be certain that they were not coerced. This story reveal that overall, justice and our system of justice is not motivated by justice but by power and position, that the checks and balances we assume are a part of our legal systems are obscured by pride, arrogance and manipulation of its enforcing agents, incentives are going opposite of justice, auditing of our legal systems is completely inadequate and that victims of such false convictions have no remedy. It is unfortunate that journalism is our seemingly only defender of truth, justice and the American Way. The incentives of our legal systems seem trended towards quotas rather than justice and reputation and this without remedy for almost all victims of being falsely charged. I was aghast at the inadequacy of the defendants legal representation and lack of energy on behalf of their clients. Surely, as evidenced here, justice is bought. How then can we expect a common man to stand against an entire common-wealth and receive justice. How can we then trust the facts to the same individuals we pay to protect our justice system if they are so easily distracted. I found it ironic that the freedom of these innocent men was bought by a generous donations of a high-priced legal teams. My gratitude for their service but, what of the potentially thousands who will never have such hope for an adequate defense. I have always found it ironic that the innocence on which a free conscience stands is often used against innocent men who is unknowing of common legal trickeries and it is the truly criminal who, harden by life and experience who, contrary to what should be, are least affected by our legal systems manipulations and coercions. It is true that torture works much more effectively on an innocent man than on a criminal for if is the innocent man who fears most of losing everything, whereas the criminal has everything to gain. Show this video to your children. Warn them of the system and teach them to endure under fire false accusations even when alone and weary. Teach your children to demand adequate legal representation and to never give up, even when threatened with torture, death and solitude for a lack of confession may be your last great hope for freedom. And, never tell people what they want to hear for they are NOT your friends. And as long as you are able, keep your honor and integrity by never involving anyone innocent. Parents, never play part to any agents holding your children and never let your children go to the police station alone, ever. They do not understand what might happen and they need your wisdom and experience.
FRONTLINE: The Confessions DVD
D
Duke D.
Anonymous User
5.0 star rating
07/17/20
UNBELIEVEABLE
Review by Duke D. on 07/17/20 review stating UNBELIEVEABLE
I WATCHED THIS PROGRAM COULD NOT BELIEVE WHAT THE POLICE,THE COURTS,ATTORNEY GENRAL, THE JURY ESPECIALLY THE IDIOT JUDGES WHO WERE PROABLY SLEEPING OR DID NOT CARE WHAT WAS HAPPENING TO THESE MEN. (INNOCENT MEN). I COULD GO ON ON.I JUST BOUGHT THE DVD TO SHOW MY FRIENDS WHAT COULD HAPPEN IN NORFORK,VA.WHEN YOU ARE INNOCENT. UNBELIEVEABLE FRONT LINE IS ALWAYS GREAT PROGRAMMING.
FRONTLINE: The Confessions DVD
Copyright © 2022 Public Broadcasting Service (PBS). All rights reserved.   PBS.org   PBS Mission   Privacy & Security   1-800-531-4727 1-833-565-0293