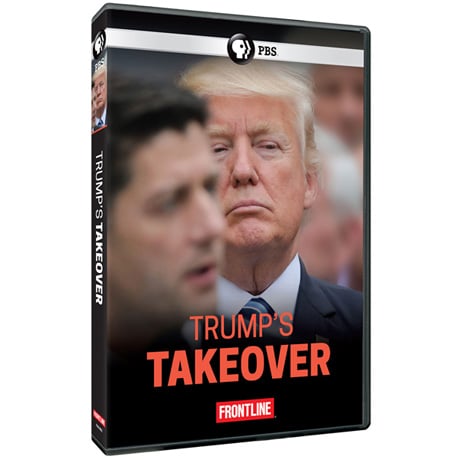 No Reviews Write the First Review
Item #: WB5152AV
Inside President Donald Trump's high-stakes battle for control of the Republican Party. How Trump attacked fellow Republicans and used inflammatory rhetoric that rallied his base and further divided the country in his first year as president.
Add to Wish List

Inside President Donald Trump's high-stakes battle for control of the Republican Party. How Trump attacked fellow Republicans and used inflammatory rhetoric that rallied his base and further divided the country in his first year as president.

FRONTLINE: Trump's Takeover President Donald Trump's time in office has been marked by ongoing turmoil - including in his own Republican Party, where presidential tweetstorms, inflammatory rhetoric and high-profile dissent have fueled open conflict.

In Trump's Takeover, FRONTLINE's acclaimed political team tells the inside story of a president who vowed to take down the Washington establishment, and who has fought an intense war for control of the GOP. Through interviews with longtime Republican legislators like Sen. Jeff Flake (R-Ariz.), House Freedom Caucus members including Rep. Jim Jordan (R-Ohio), current and former senior White House officials including Kellyanne Conway and Sean Spicer, authors, and journalists, Trump's Takeover examines how the president is remaking the GOP in his own image, counter-punching when criticized and publicly attacking those who defy him.

The film traces the president's relationship with the GOP-led Congress, from his Twitter attacks on fellow Republicans after the failed Obamacare repeal-and-replace effort, to a split over what many in the party said was the president's inadequate response to deadly violence at a white supremacist rally in Charlottesville, to when Congress ultimately delivered a major legislative victory for Trump with the passage of tax reform.

Gripping and revealing, Trump's Takeover is a window into the potential lasting impact of the Trump era on the Republican Party and the American political system as a whole. It's the story of President Trump's takeover of the Republican Party - from the perspective of Republican lawmakers and insiders themselves.