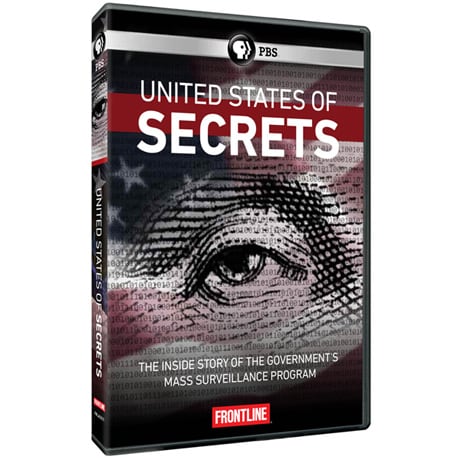 $24.99
6 Reviews Write a Review
Item #: WB5192
FRONTLINE: United States of Secrets FRONTLINE goes behind the headlines to reveal the dramatic inside story of how the U.S. government came to monitor and collect the communications of millions of people   END_OF_DOCUMENT_TOKEN_TO_BE_REPLACED
Add to Wish List

Liberty's Kids: Born Free and Equal + The Man Who Would Not Be King DVD - AV Item

The Mind of a Chef: April Bloomfield (Season 2) DVD

FRONTLINE: The Merchants of Cool DVD

FRONTLINE goes behind the headlines to reveal the dramatic inside story of how the U.S. government came to monitor and collect the communications of millions of people around the world - including ordinary Americans - and the lengths they went to as they tried to hide this massive surveillance program from the public.

Part One goes inside Washington and the NSA, piecing together the secret history of the unprecedented surveillance program that began in the wake of September 11 and continues today - even after the revelations of its existence by Edward Snowden.

Part Two explores the secret relationship between Silicon Valley and the NSA, and investigates how the government and tech companies have worked together to gather and warehouse your data.

From the investigative team behind FRONTLINE's award-winning Money, Power & Wall Street, United States of Secrets is the definitive history of domestic surveillance in a post-9/11 world. Part political thriller and part spy novel, the series is gripping viewing for those who want to understand the context of the Snowden affair - and what it means for all Americans.

FRONTLINE: Secrets of the Vatican DVD