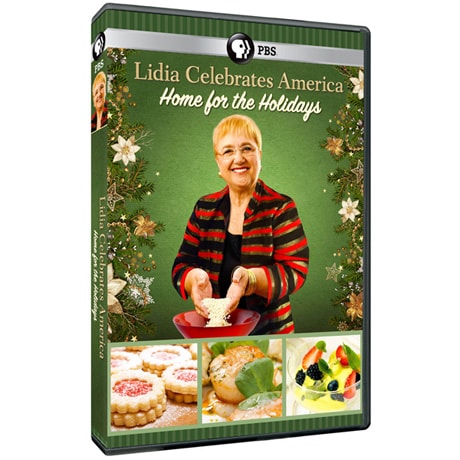 For celebrity chef, author, and restaurateur Lidia Bastianich, there is no place like home - especially at Christmas, her favorite time of year. In Home for the Holidays, Lidia invites six celebrity guests of different ethnic backgrounds to her holiday table: Christopher Walken, award-winning actor and childhood friend; award-winning actress Rita Moreno; Ann Curry, television journalist; model and television host Padma Lakshmi; celebrity chef Marcus Samuelsson; and Carlo Ponti, Jr., conductor.
Combining the best of the old and the new, Lidia shares her own culinary customs with the varied holiday traditions of her guests, beginning in the kitchen and ending at the dinner table, where Lidia has prepared a dish inspired by each of her guests' roots and ethnic culinary traditions. The film tells the deeply personal stories of each individual's journey to and in America, all set against a backdrop in which they share a wonderful and delicious meal that represents the diverse flavors that are all part of celebrating the yuletide in New York.
Special Features: Printable recipes including Lidia's Meatballs, Little Pizza Turnovers, Risotto con Porcini, Limoncello Tiramisù, and many more!