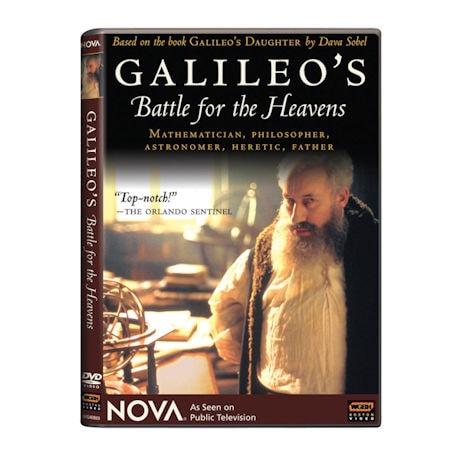 The pioneering astronomer and condemned heretic comes to life in this fascinating film version of Dava Sobel's best-seller, Galileo's Daughter. British actor Simon Callow portrays the seventeenth-century genius who defied tradition and years of imprisonment to advance a new vision of the universe, recreated through letters from his devoted daughter Maria Celeste, a cloistered nun.

5 star rating 2 Reviews
2 Reviews
J
Jim M.
Anonymous User
5.0 star rating
07/17/20
Factual and Entertaining
Review by Jim M. on 07/17/20 review stating Factual and Entertaining
I have seen many shows about Galileo. This particular DVD was a particlaurly well done rendition, with entertaining actors, excellent expert commentary, nice photography in Tuscany, and well portrayed quotes that are not commonly heard in some of the other tellings of the Galileo story. I would strongly recommend this DVD.
NOVA: Galileo's Battle for the Heavens DVD
P
Professor A.
Anonymous User
5.0 star rating
07/17/20
Another excellent piece of work
Review by Professor A. on 07/17/20 review stating Another excellent piece of work
This is a wonderful reconstruction of one of the greatest controversies in the history of Science. It also explores two sidelights of Galileos story that are not as well known as his famous controversy with the church. Few outside of the history of science know of his ground-breaking work during the last ten years of his life, after he was silenced by the church in 1632 and forbidden to do astronomy. What is more, even historians of science knew little about the close relationship he had with his eldest daughter, Maria Celeste, before publication of the book on which the NOVA episode is based. After viewing the NOVA episode, I immediately lent it to one of my students who is taking another professors seminar on Galileo.
NOVA: Galileo's Battle for the Heavens DVD
Copyright © 2023 Public Broadcasting Service (PBS). All rights reserved.   PBS.org   PBS Mission   Privacy & Security   1-800-531-4727 1-833-565-0293