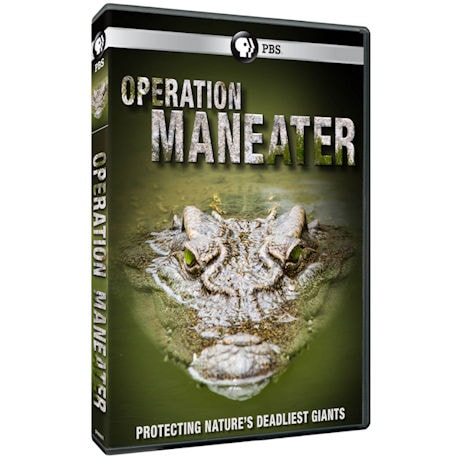 Food for the Ancestors DVD

In Operation Maneater, veterinarian Mark Evans uses technology to tackle three of nature's deadliest giants: the Nile Crocodile, the Polar Bear, and the Great White Shark. When these animals attack humans, both sides lose out. As more people are killed or maimed by these stealth hunters, more animals are being killed in retaliation.

Mark Evans is on a personal mission to find ways to break the circle of violence and protect both animals and humans. Follow him as he tries out ingenious high-tech solutions to the most hostile wildlife conflicts on Earth. On Namibia's Chobe River, he joins experts using electric shock devices to train wild crocs to take humans off the menu. In Perth, Australia, Mark tests the latest shark detection and deterrent systems. And in Northern Canada he uses a military grade Long Range Acoustic Device to scare Polar Bears away from an Inuit town.

Episodes include…
Crocodile - Mark Evans travels to the reputed croc attack capital of the world: Namibia's Chobe River. Crocodiles eat more humans than any other predator and Africa's Nile crocodiles are notoriously aggressive. Namibian conservation efforts to save Nile Crocodiles have been more than successful. Crocodiles here are growing in number, attacks are on the rise and locals are killing crocs in retaliation.

Polar Bear - Mark Evans travels to the shores of Canada's Hudson Bay. Every year bears congregate along this coast as they wait for the sea ice to harden so they can they head north and feast on seals. But bold bears are venturing into the towns of Churchill and Arviat and are terrorizing local residents. Three people have been viciously attacked in recent months and bears are regularly shot dead in self-defence.

Shark - The Southwest Australian coast near Perth is the shark attack capital of the world. Last summer saw a record number of five fatal shark attacks. Australians love to swim, surf and dive, but many are now scared to enter the water. The situation has become so desperate that the authorities have implemented radical measures - sharks found near beachgoers can now be hunted and killed.