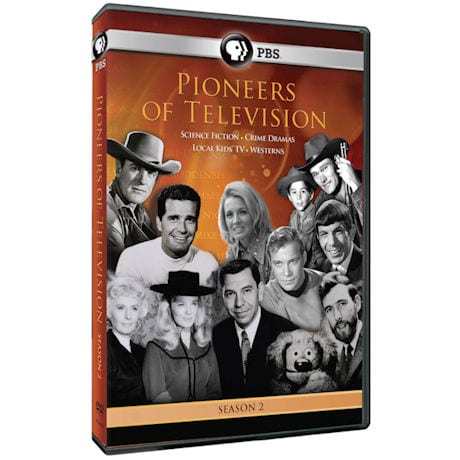 Science Fiction - Leonard Nimoy, William Shatner, and Nichelle Nichols reflect on the birth of Star Trek. Lost in Space is remembered by Bill Mumy and Angela Cartwright. And a lost interview with Rod Serling highlights a look at The Twilight Zone.

Crime Dramas - This episode begins with the 1950s Dragnet and the Untouchables; includes 1960s hits Mission: Impossible, I Spy and Hawaii Five-0; and wraps with 1970s favorites Rockford Files, Columbo, and Police Woman.

Westerns - James Garner (Maverick), Robert Conrad (Wild Wild West), and James Arness (Gunsmoke) are just three of the pioneers who talk about their experiences in this episode - which also includes Linda Evans (Big Valley) and Fess Parker (Daniel Boone). Classics like Bonanza and The Rifleman are also featured.

Local Kids' TV - Jim Henson, Willard Scott, and Fred Rogers are among the performers who started their careers in local TV. These three icons - and a dozen others - are featured in this episode that highlights the clowns, pirates, spacemen, and puppets who made local kids' TV memorable for a generation.

Animal Parade A to Z Puzzle