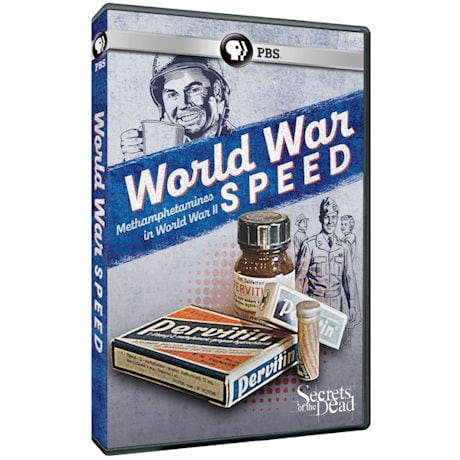 No Reviews Write the First Review
Item #: WC2492
Secrets of the Dead: World War Speed Stories about Hitler's drug use and the fact that Germans gave their soldiers methamphetamine have been widely told. What's not as well-known is the tale of how Allied   END_OF_DOCUMENT_TOKEN_TO_BE_REPLACED
Add to Wish List

NOVA scienceNOW: How Does the Brain Work? DVD

Secrets of the Dead: World War Speed Stories about Hitler's drug use and the fact that Germans gave their soldiers methamphetamine have been widely told. What's not as well-known is the tale of how Allied commanders followed suit and embraced pharmacological 'force enhancers' with a vigor Hitler and the Nazis never matched.

By 1941, after rumors swirling about Nazi soldiers on a 'super-drug' were confirmed and the drug was identified as methamphetamine, Allied commanders launched their own classified program to find the perfect war-fighting drug. They thought Benzedrine was the answer, and its intended purpose went far beyond helping soldiers stay awake.

Modern weapons and total war proved so terrifying that almost as many men were shredded by shell shock and combat exhaustion as by bullets and shrapnel. During the Second World War, one in three casualties were incapacitated without a scratch on them. It was known by a variety of names, but today we call it Post Traumatic Stress Disorder (PTSD). Speed, it was hoped, might help defeat not just the need for sleep, but anxiety and fear. By war's end, America alone would dish out as many as 500 million tablets of amphetamines to US servicemen. Just how this drug affected the course of World War Two is an ongoing controversy.

In this episode of SECRETS OF THE DEAD, historian James Holland launches into a compelling journey that takes him from German bombers pulled from the depths of Norwegian fjords and obscure European museums, to a modern British military demolitions range and into the belly of a restored Sherman tank. At each stop, Jim works to connect the dots from both sides, Allied and Axis, and discover the truth behind what one historian calls, the world's 'first pharmacological arms race'.