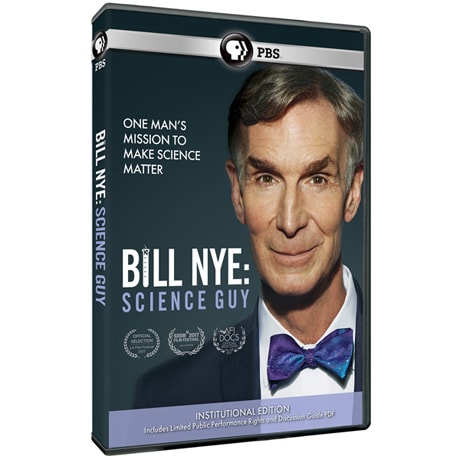 No Reviews Write the First Review
Item #: WED022AV
Bill Nye: Science Guy Bill Nye is a man on a mission: to stop the spread of anti-scientific thinking across the world. The former star of the popular kids show Bill Nye The Science Guy is now the CEO   END_OF_DOCUMENT_TOKEN_TO_BE_REPLACED
Add to Wish List

The Black Panthers: Vanguard of the Revolution - School Edition DVD

Bill Nye: Science Guy Bill Nye is a man on a mission: to stop the spread of anti-scientific thinking across the world. The former star of the popular kids show Bill Nye The Science Guy is now the CEO of The Planetary Society, an organization founded by Bill's mentor Carl Sagan, where he's launching a solar propelled spacecraft into the cosmos and advocating for the importance of science, research, and discovery in public life. With intimate and exclusive access - as well as plenty of wonder and whimsy - this behind-the-scenes portrait of Nye follows him as he takes off his Science Guy lab coat and takes on those who deny climate change, evolution, and a science-based world view. The film features Bill Nye, Neil deGrasse Tyson, Ann Druyan, and many others.

Bill's Father and the Solar Noon Clock
Bill takes us on a tour of Cornell University to show us his "solar noon clock" which was made in honor of his father who spent time as a prisoner of war in WWII.

Climate March
In an effort to make NYC more green, Bill joins the march to for a 100% renewable city.

Marc Morano
Marc Morano is a climate change contrarian who is making his own documentary, alleging that there is a scientific conspiracy to mislead the public that an increase in CO2 causes climate change.

Independent Lens: The Black Panthers: Vanguard of the Revolution