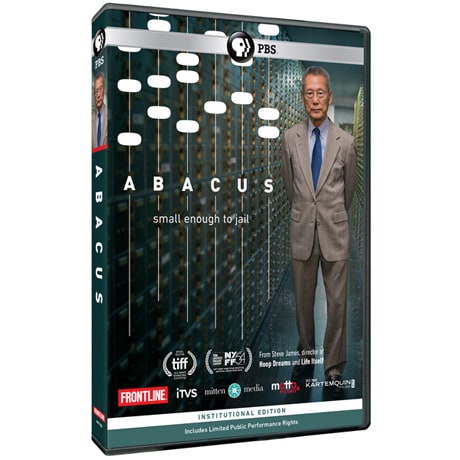 From acclaimed director Steve James (The Interrupters), this Academy Award® Nominee for Best Documentary Feature, Abacus: Small Enough to Jail tells the saga of the Chinese immigrant Sung family, owners of Abacus Federal Savings of Chinatown, New York. Accused of mortgage fraud by Manhattan District Attorney Cyrus R. Vance, Jr., Abacus becomes the only bank prosecuted after the 2008 financial crisis. The indictment and subsequent trial forces the Sung family to defend themselves - and their bank's legacy in the Chinatown community - over the course of a five-year legal battle.

"One of the great documentaries of recent years." - David Poland, Movie City News

"Both an affirmation and an indictment of the American Dream." -Stephen Dalton, The Hollywood Reporter

3 stars out of 4 stars
"The only U.S. bank tried for mortgage fraud since 2008, the evidence suggests they were selected as a tempting target while the big fish went free. Recommended."" - Video Librarian