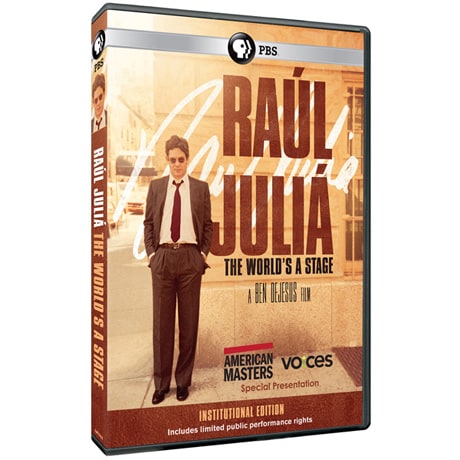 No Reviews Write the First Review
Item #: WED152AV
American Masters: Raúl Juliá: The World's a Stage examines the life and career of the inspiring entertainer, Raúl Juliá. The feature documentary is a revealing portrait of the   END_OF_DOCUMENT_TOKEN_TO_BE_REPLACED
Add to Wish List

American Masters: Raúl Juliá: The World's a Stage examines the life and career of the inspiring entertainer, Raúl Juliá. The feature documentary is a revealing portrait of the charismatic actor, who earned recognition across the world for his versatility on stage and on screen before his life was tragically cut short. From his early days on local stages in Puerto Rico to stardom on Broadway and in Hollywood, Raúl's story is one of passion, determination, and a bit of magic – all qualities for which his performances were known. Before "diversity" was a buzzword, the man with the big personality and thick accent was able to amass a varied body of work that stands the test of time and that's helped pave the way for many Latino actors today.

Told in his own voice through archival interviews and in the words of those who knew him best, the film traces his personal and professional journey while showcasing his groundbreaking theater performances and scenes from his cinematic career.

H2O: The Molecule That Made Us DVD

Masterpiece: A Room With A View DVD (U.K. Edition)