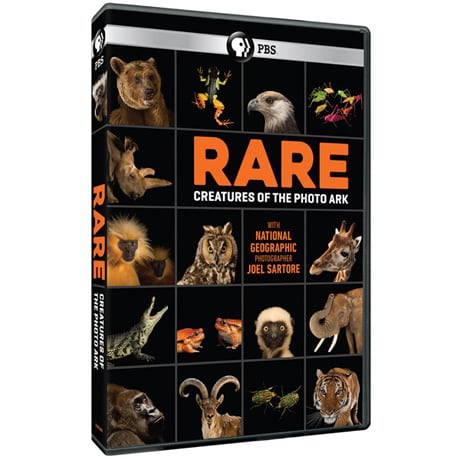 Rare: Creatures of the Photo Ark

No Reviews Write the First Review
Item #: WA8552
RARE: CREATURES OF THE PHOTO ARK Renowned National Geographic photographer Joel Sartore is a natural-born storyteller. His Photo Ark project is a digital "collection" of the world's rare and   END_OF_DOCUMENT_TOKEN_TO_BE_REPLACED
Add to Wish List

Tell Them We Are Rising: The Story of Historically Black Colleges and Universities

RARE: CREATURES OF THE PHOTO ARK Renowned National Geographic photographer Joel Sartore is a natural-born storyteller. His Photo Ark project is a digital "collection" of the world's rare and at-risk mammals, fish, amphibians, birds, reptiles, and insects, and the focus of RARE - Creatures of the Photo Ark. This captivating series follows Sartore as he documents threatened species in the wild, at zoos, and in nature preserves. Throughout RARE, scientists and naturalists reveal surprising and important information about why ensuring the future of these animals is so critical.

Most days, Sartore has the best job in the world; from prankish semi-habituated lemurs crawling over him in Madagascar to a 500-pound, 150-year-old giant tortoise refusing to get ready for his close-up, or an elusive bunny taking refuge near an active U.S. Navy airstrip, it's all in a day's work! Sartore knows he is in a race against time. Sometimes he is able to photograph 30 to 40 species in a few days. Others are disappearing before he can get to them. Sartore likes photographing the smallest creatures for the Ark because they're often more important to the health of an ecosystem than the big ones. RARE looks at factors driving extinction, including deforestation, rising sea levels, invasive species, pollution, and human development, which all impact creatures essential to the world's ecosystems.

And Sartore has seen how photos can lead to change. His images of parrots in South America and koalas in Australia prompted local governments to protect them. In the U.S., coverage of the Photo Ark has helped to save the Florida grasshopper sparrow and the Salt Creek tiger beetle. Journey with Sartore across the globe - to Africa, Asia, Europe, North America, and Oceania - to chronicle his experiences as he seeks to inspire people to want to protect the many species of our planet.

The Life and Times of Frida Kahlo DVD

Secrets of the Dead: After Stonehenge DVD

The Journey of Sacagawea DVD