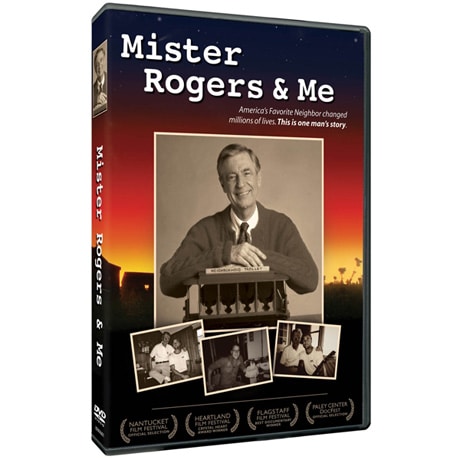 Mister Rogers and Me DVD

Mister Rogers' Neighborhood: Would You Be Mine Collection DVD

Mister Rogers' Neighborhood: Would You Be Mine Collection DVD - AV Item

Mister Rogers & Me - America's Favorite Neighbor changed millions of lives. This is one man's story.

Mister Rogers summered in a modest house on a quiet corner of Nantucket Island. MTV producer Benjamin Wagner's mother rented the cottage next door. Mister Rogers really was his neighbor. On the afternoon of their first meeting, ""America's Favorite Neighbor"" asked the young journalist about his job. Wagner--a PBS mind in a jump-cut, sound-bit MTV world - expressed enthusiasm tempered with an iota of ambivalence.

Mister Rogers said warmly, ""I feel so strongly that deep and simple is far more essential than shallow and complex."" One year and many ""deep and simple"" conversations later, Rogers whispered, ""Spread the message, Benjamin!""

After Rogers' death in 2003, Wagner and his brother, Christofer, set out to learn more about the man himself and discover what he meant by ""deep and simple."" The brothers' travels led them to conversations with Meet the Press anchor (and Nantucket neighbor) Tim Russert; Arthur creator Marc Brown; NPR correspondent (and sometimes Neighbohood co-host) Susan Stamberg; Neighborhood puppeteer and Campaign for Commercial-Free Childhood founder, Dr. Susan Linn; and many other neighbors and friends of Mister Rogers.

The brothers come to know more than just the man and his luminous legacy. Their personal journey unearths the roots of Mister Rogers' values, unmasks the forces acting against depth and simplicity, and helps them to develop the means to lead deeper, simpler lives.

The Eye Of Time Clock